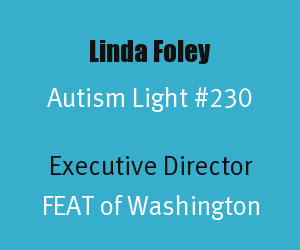 Linda Foley is the Executive Director of FEAT of Washington (WA). FEAT stands for Families for Effective Treatment of Autism. The organization is based in Belleville, Washington. According to Linday Foley there are over 10,000 families in the state of Washington effected by autism. Linda Foley is an Autism Light for her efforts to lead FEAT of WA in making life brighter for those with autism in Washington state.

The following is a Comcast Newsmakers feature on Linda Foley in her work at FEAT of WA.

Linda Foley said in the above interview, "FEAT of Washington is a nonprofit organization dedicated to providing families with hope and guidance so their children with autism can achieve their full maximum potential." For more information on FEAT of Washington visit their website at www.featwa.org
You can also contact FEAT of WA at the following address:
FEAT of Washington
Located in Lake Sammamish Foursquare Church
14434 NE 8th St., Second Floor
Bellevue, WA 98007
Phone (425) 223-5126
Fax (425) 502-9310
admin@featwa.org

FEAT of Washington is also featured as a resource in the Autism Guidebook for Washington State.
In addition to her leadership of FEAT of Washington, Linda Foley also serves as Vice President of the Board of Directors of CHILD (Children's Institute for Learning Difficulties (Source).

Autism Light honors diverse heroes to the world of autism.
﻿
Posted by Alan Stokes at 5:52 PM