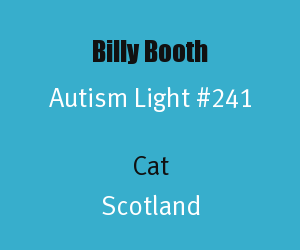 Billy is a cat who lives with the Booth family at the Balmoral estate in Aberdeenshire in Scotland. Billy was a stray and abandoned cat that was taken in by the charity Cat's Protection and then subsequently adopted by the Booth family. Billy is an Autism Light because of the life-changing impact he has made in the life of Fraser Booth, a 6 year old boy with autism who is part of his adopted family. This post on Billy Booth was updated in honor of the book When Fraser Met Billy being published in February, 2014. The book was written by Louise Booth, Fraser's mother, and you can purchase it on Amazon.com.

Here is a video about when Fraser met Billy the cat.


When Fraser was 4, his mother Louise said:


"If Fraser is around or playing in the garden, Billy is never far away. It is like he is watching Fraser and calming his behaviour. He always appears when Fraser is getting upset and offfers his head close to Fraser's to reassure him and recently, when Fraser was poorly, Billy sat on his lap all day. They say animals can sense things, but Billy seems to know before anybody else if Fraser is going to get upset (DailyMail.com, Liz Hull, June 15, 2012)."

Mrs. Booth added, "Bill has made a complete difference to our family life, he's taken away the stress, he's added happiness and an air of calm, he's just been amazing (DailyMail.com, Liz Hull, June 15, 2012)."

Autism Light first wrote about Billy the Cat in 2012, and now in 2014 their relationship is changing but still important. Fraser's mother says:


Fraser’s relationship with Billy, meanwhile, continues to evolve as he grows less dependent on his furry friend. “It’s a different relationship because Fraser isn’t as intense a person as he was,” says Booth. “Now they really are best buddies. Before, Billy was very much like a minder, looking out for Fraser all the time (Scotsman.com, Ruth Walker, 2/8/2014).

Social Media: You can follow Billy and Fraser on the Facebook Page for their book called When Fraser Met Billy.