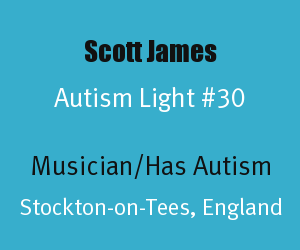 Scott James has the form of autism known as Asperger's Syndrome. He is an extraordinary musician from Stockton-on-Tees, England. Scott James is an Autism Light because of his musical ability that he uses to bring awareness to Autism.  He is a role model to all those with autism.

His autism created such a disability for him that for seven years he would not leave his home outside of school. All that has changed though as he has taken his wonderful voice out to the public. Mike Frankland of England's music industry said about Scott James, "He is stunningly good. No mater what you give him he can sing it."

Here is a glimpse at Scott James work through the years.

Please consider purchasing his single Through My Eyes from www.scottjames.org.  Scott James has designated proceeds from the single to go to the Daisy Chain Project, a charity in England that helps families with autism. It is available for purchase on ITunes and Amazon as well.

2009
Britain's X-Factor: Scott James participated and made it to the final 50 of Britain's X-Factor show in 2009. When Scott James was asked about his appearance on the X-Factor in 2009, he said, "I'm proud to be autistic. I've met some incredible people with autism. I want to show the world that we can make a success of our lives (Source)." On the X-Factor (2009) Scott James wowed the world with his version of the Westlife hit You Raise Me Up. Below is the video of part of that performance from YouTube.
Anti-Bullying: Scott James also has spoken out against bullying and recorded this message on Anti-Bullying in Long Beach, California. Some other videos of Scott James singing are available on Scott's YouTube channel. Social Media: You can follow Scott James on the following social media areas.
Thank you Scott James for being a fantastic voice and an example that people with autism can achieve their dreams. We look forward to hearing wonderful music from your amazing voice in the years to come. Autism Light honors diverse heroes to the world of autism.
Posted by Alan Stokes at 7:08 AM