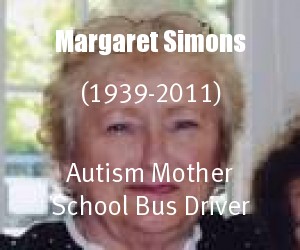 Margaret Simons is from Illinois and is a parent of Ralphie, a 42 year old man with autism. She was a jewel among autism parents of her generation. She raised her child with autism in the 1970's, a period when there were few resources available for autism education, because the condition was much less common back then compared to today.

This is the first time Autism Light has designated someone posthumously. Margaret Simons, 72, passed away on Sunday, August 28, 2011. She was in a fatal automobile accident that also took the life of her mother and Ralphie's Grandmother Suzanne Thompson. Her autistic son Ralphie was in the car at the time  and had to be hospitalized before he could return home. The funeral for Margaret Simons was held Friday, September 2, 2011, in Arlington Heights, Illinois. You may sign the Legacy Obituary for Margaret Simons through August 31, 2012. 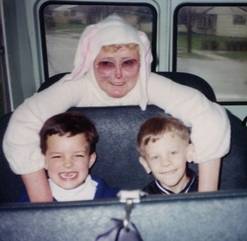 A news report on Margaret Simons' tragic death with some additional information on Margaret Simons' life can be found at www.dailyherald.com/article/20110901/news/709019963/.  Ralphie lives in the state operated Shapiro Center in Kankakee, Illinois. In fact, Margaret and her mother became "Mom & Gram" to many residents at Ralphie's home that had no one else to remember them on special occasions.


I always told Aunt Marge and Grandma Thomson how lucky these children/adults were to have them. They always corrected me and told me they were the lucky ones to have these special adults and children in their lives!!

Margaret Simons is an Autism Light for all she did during her life for her son with autism and for countless others. She was a bright light to many children with autism in her community who rode her bus over the decades she served as a special needs school bus driver. And then she continued that light to adults with special needs who were residents at the Shapiro Center with her son Ralphie.

Photo: Photos in this post are used with permission of Meg Thomson.
Posted by Alan Stokes at 8:28 AM