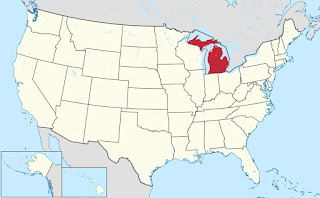 The State of Michigan is the home of 18 Autism Lights shared in 15 posts. Michigan is also the home f the creator of the Autism Light blog. The Michigan group includes 3 people with autism, two athletes, 9 autism parents, a business, a historical landmark, an animal, a shopper at Meijer, and a university autism clinic.


Note: Alan Stokes is the autism father who is the creator and blogger of Autism Light. He is from Lansing, Michigan.

You may reach all these posts by searching the blog through the "Michigan" Label.

The map of Michigan is attributed to By TUBS [CC BY-SA 3.0 (http://creativecommons.org/licenses/by-sa/3.0)], via Wikimedia Commons
Posted by Alan Stokes at 9:02 PM