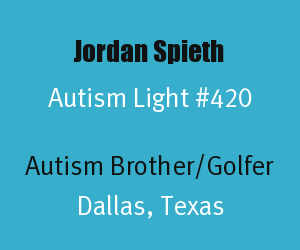 Jordan Spieth is a professional golfer and is an autism brother from Dallas, Texas. Jordan's younger sister Ellie Spieth has autism and has inspired him on his amazing trip to the top of the golfing world at just age 21 (he was born on July 27, 1993). Jordan Spieth is an Autism Light for his brotherly love, autism advocacy and for starting The Jordan Spieth Family Foundation that will help secure educational opportunities for those with autism and special needs.

The following was posted on Twitter by Jordan to honor his sister Ellie.

Hangin out with the true athlete of the family #Ellie #diva @StevenSpieth pic.twitter.com/Ip8RqYUATD
— Jordan Spieth (@JordanSpieth) May 10, 2013

Early Career: Jordan Spieth won the U.S. Junior Amateur in 2009 and 2011. He played college golf for a year and a half at the University of Texas. In the middle of his Sophomore season in 2012, he made the decision to turn professional at age 19.

PGA Golfing Career: Jordan Spieth has had immediate success as a professional golfer. He is ranked 2nd in the world at the time this post was written. The list of major championships he has won include:
The following is an interview Jordan Spieth did on CBS This Morning where he talks about his golfing and inspirational sister Ellie.


About His Sister Ellie:  When asked about the impact he has had from his sister Ellie and her journey with autism, Jordan Spieth said this:


"How has she shaped my upbringing? Well, she's the most special part of our family. She's the funniest part of our family. I love having her around. She's an incredible sister, my biggest supporter. She is somebody who you can watch and then reflect on the big picture of life and understand that all these frustrations in a day, or in a round of golf, are really secondary. We wouldn't have that realization without her (Jordan Spieth as quoted by CNN.com, April 14, 2015)."

The following is a PGA Tour video about Jordan Spieth's story of success.


Wikipedia: You can read more about Jordan Spieth on his Wikipedia Page.

Social Media: You can follow Jordan Spieth on the following social media areas.
Special thanks to Jordan Spieth for being an Autism Light. Jordan's autism advocacy, his foundation, and his promotion that his sister who has autism has helped keep him grounded are shining a light for autism. We wish Jordan Spieth all the best in his pro golfing career. We have the feeling that this post will be updated several times in the years to come as Jordan reaches new heights in the field of golfing and autism advocacy.

Autism Light honors diverse heroes to the world of autism.
Posted by Alan Stokes at 10:34 PM