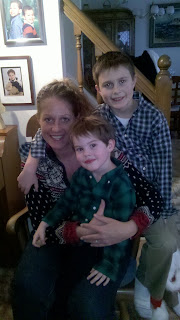 With the mood very hopeful that 2012 might bring Autism Insurance Coverage to the state of Michigan, we recognize Stephanie Crane (formerly Stephanie Harlan) and her 13 year old son Justin Harlan who have advocated for the need for autism insurance in Michigan for 6 years. Stephanie and Justin are from Berkley, Michigan. Justin had been diagnosed with autism and is himself an example to the success of early intervention. But Justin's personal success has not led him and his mother to retreat to their own victory over autism, but instead they have continued year in and year out to make it their cause to speak for those that do not have a voice and need autism treatment. Stephanie and Justin Harlan are Autism Lights because of their advocacy that children with autism in Michigan have insurance coverage for autism treatment. Let's meet this mother and son advocate team.

The following is a video of Justin Harlan testifying at a Michigan House Health Policy Hearing back when he was 8 years old in 2007.


This next video is of Stephanie and Justin Harlan presenting their "Top Ten Reasons Why Autism Insurance Legislation Should Pass Michigan" at an Autism Insurance Rally at the State of Michigan Capital steps in April, 2009. At this time Justin is 10 years old.


About Justin Harlan:  Justin turns 13 this month. He is a 7th grader at Anderson Middle School in Berkley, Michigan. Justin was diagnosed with Autism in 2001 at age 2 and he did not speak until 4 1/2 years of age. Because of effective early intervention he has been mainstreamed since kindergarten. His mother Stephanie described Justin like this:


He has a beautiful voice, and currently sings in the church choir and has a lead role in a Community Theatre production of Schoolhouse Rock. Justin loves to play computer and video games, create digital music, and play in Magic the Gathering card tournaments on the weekends. His best buddy is his little 5 year old brother who idolizes him! But he is well liked and has many friends at school and in the community. Justin has a wonderful sense of humor, and uses his intelligent wit to keep his classroom and his teachers amused. Justin is taking advanced classes at school (high school level Algebra and Spanish) and loves to pursue intellectual challenges such as Word and Number games.

Justin Harlan's autism advocacy is explained in this way by his mother Stephanie Crane.


Justin is a staunch Autism Advocate and is the first to use his former diagnosis of autism when talking about the need for insurance reform in the state of Michigan. He has used his personal story of recovery to testify twice in Lansing (Michigan's Capital) and speak at public rallies. He also has been interviewed on several local television and radio news shows and has appeared countless times in the newspaper. Justin takes his "celebrity" status in stride, and is always excited when his name is out there, as he wants to spread the word that autism treatment DOES WORK and should be made available to all kids.

About Stephanie Crane: Stephanie graduated from the University of Michgian in 1990 with a BA in Social Psychology and in 1991 with a Masters in Social Work degree. Stephanie currently works as a Clinical Case Manager and Subject Matter Expert (systems trainer) for Blue Cross Blue Shield of Michigan. Stephanie is a licensed, board-certified clinical social worker and has spent 19 years as a clinical social worker in a variety of environments including medical, school, child and family work, crisis intervention, CMH, non profit director, business owner, and managed care.

Stephanie Harlan had worked for Autism ASK prior to coming to her current position at Blue Cross Blue Shield of Michigan.  Stephanie explained her experience and honors in this way:


After her son was diagnosed with autism in 2001, she helped to create Everyday Miracles, a nonprofit organization designed to support families and provide financial assistance. In 2005 she was hired by the Judson Center to create programming for children, teens and adults with autism and she worked as the Program Director of the Autism Connections for almost five years until founding Autism ASK. Stephanie has served on the Board of Directors of the Autism Society of Michigan and is currently on the executive board of Autism Insurance in Michigan (AIM) and is involved in lobbying efforts, advocacy and community awareness. Stephanie was the recipient of the E.P. Maxwell J. Schleifer Distinguished Service Award in 2009 and was honored at Comerica Field by MassMutual on Disability Awareness Night.

Message to Parents:  Autism Light asked Stephanie Crane if she had any encouragement for parents of children with autism and this was her response.


The message both Justin and I like to give to parents is that of HOPE. Your child is never 'too old' to get benefits from treatment. You have never tried every single treatment approach. There is always something else to uncover, another therapy being discovered, or that perfect combination of things that is your child's perfect combination. I noticed that for Justin, a combination of biomedical intervention WITH intensive ABA speech and OT seemed to be the combination that worked for him. Doing any of those alone did not get the desired effect. But we tell parents to never give up. Never give up fighting for what your child needs- whether it's therapy, insurance coverage, or better school services--because there is HOPE and your child deserves you to fight for them.

Current Status of Autism Insurance in Michigan: Autism Insurance in Michigan has received tremendous momentum in 2012.  In the Executive office of the State of Michigan both Governor Rick Snyder in his 2012 State of the State and Lt. Governor Brian Calley have championed the cause (Lt. Governor Brian Calley was Autism Light #17 and has a daughter with autism). On March 8, 2012 the Michigan Senate Health Policy Committee passed Autism Insurance Legislation (SB 414, 415 and 981) and moved it to the full Senate for consideration, calling the coverage of autism treatments a "moral public responsibility" (Source). To keep informed of the current status of autism insurance legislation in Michigan visit regularly the My Great Kid Blog.

Special thanks to Stephanie Crane and Justin Harlan for their autism advocacy. If autism insurance coverage is adopted in Michigan this year it is people like Stephanie and Justin who have spoken out for years on the issue that we must surely thank and show our gratitude too.

Autism Light honors diverse heroes to the world of autism.
Posted by Alan Stokes at 9:33 AM