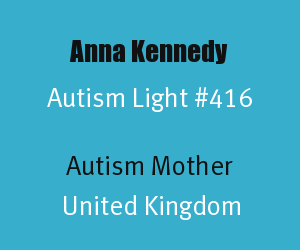 Family: Anna Kennedy is married to Sean Kennedy. Sean is a legal advocate at Anna Kennedy Online, who helps the charity provide free legal support to autism families. The couple have two sons, Patrick and Angelo, who have autism.

In the following interview Anna Kennedy talks about raising her two sons, Patrick and Angelo, who have autism.


Hillingdon Manor School: In September 1999, Anna Kennedy opened Hillingdon Manor School in London (BBC News, January 5, 1999). After trying 26 schools and still being unable to find a school to accept her boys with autism, Anna Kennedy mortgaged her home and turned in her life savings in order to purchase the building for this groundbreaking autism school. Today it is an independent specialist school that offers educational instruction to 179 children between ages 3-19 at three different sites. Find out more about the school Anna Kennedy started at www.hillingdonmanorschool.org.uk.

Other Facilities: In 2011, Hillingdon Manor acquired Baston House School in order to expand their ability to serve children with autism.  Anna Kennedy also started a college and a respite home that are making a difference for individuals of all ages with autism in the United Kingdom.

OBE: Anna Kennedy was awarded the Order of the British Empire by her Majesty the Queen Elizabeth II in 2012 for being an inspirational mother in her autism advocacy and establishing Hillingdon Manor School.

The following is a video in honor of Anna Kennedy when she won the Achieving Mum of the Year from Tesco Awards in 2013 for campaigning for autism.


Anna Kennedy Online is dedicated to promoting the inclusion and equality of children and adults with an autism spectrum condition throughout society. The charity promotes its mission of disability and equality by developing and sponsoring training, by raising awareness of the challenges faced by people with disabilities and also by its advocacy efforts with and on behalf of people with an autism spectrum condition (Source: Anna Kennedy Online).

Autism's Got Talent: In 2012, Anna Kennedy founded the event Autism's Got Talent. 2016 will be the 5th year for this annual event. Anna Kennedy told Autism Light that this occasion is the highlight of her year. It is a night where talented individuals on the autism spectrum have the opportunity to showcase their talents to the public at one of the theaters in London.

Author: Anna Kennedy published the book Not Stupid in August, 2009. The book chronicles her inspirational journey from an autism mother who wouldn't give up into a leading autism advocate. You can purchase Not Stupid on Amazon.

Motto: Anna Kennedy wrote in an email to Autism Light, "My motto in life has always been You can either Give In, Give Up, or Give it all you've got and then some. I am known for my drive, tenacity and enthusiasm in everything I do in raising autism awareness. I am always thinking out of the box for different ideas in ways to achieve my goals."

Special thanks to Anna Kennedy for shining a light for autism in the United Kingdom. From humble beginnings to her establishment as one of the top autism ambassadors in the United Kingdom, Anna Kennedy is representative of so many other autism mothers who propelled their relationship to autism into a force for good to effect change in their community, country, and our world.  We look forward to hearing new things in the future about Anna Kennedy's work for autism.

Photo: The photo in this post was used with permission of Anna Kennedy.