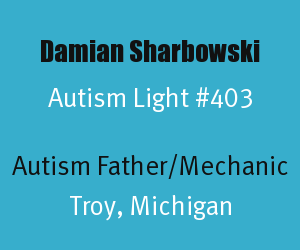 Damian Sharbowski is an autism father from the Metro Detroit, Michigan area. Damian lives in Troy, Michigan he has a business in nearby Sterling Heights. He is an auto mechanic and started Damian's Auto Service to help his son who has autism. Damian Sharbowski is an Autism Light because of his dedication as an autism father and for his work to raise funds for a groundbreaking Play-Place designed specifically for children with autism in Northern Detroit.

Damian's Auto Service: In describing his auto repair shop, Damian Sharbowski shares that he built his business in 2014 so his son who has autism would always have a place to work. Damian's Auto Service is located at 6200 15 Mile Rd. (2 Buildings East of Mound) in Sterling Heights, Michigan. For more information call (586) 698-2175, Email: damiansauto@sbcglobal.net, or visit their website at damiansauto.net.

Damian Sharbowski said, "I don't have a business degree, I am just a mechanic. But I run a business as the old adage as a spit in a handshake and that should be your word (As quoted in MyFoxDetroit.com, May 21, 2015)."

Damian also finds time to plow snow in the Winter in Michigan. He has two sons and he coaches the basketball team of his son who does not have autism.

The following is a news story on Damian Sharbowski being named one of Amy's Angels for My Fox Detroit.

Play-Place for Autistic Children: Damian Sharbowski has been working with the Northern Detroit Business Development Group in efforts to raise $42,000 to build Autistic Play Place. The facility will be located near Mound and 18 Mile Roads in Sterling Heights, Michigan. It is a 501 (c)3 organization and plans are for it to open August 1, 2015.

Damian Sharbowski described to Amy Andrews about this Play-Place saying, "This will be the first place in the United States and the world that is going to cater to autistic and handicapped children. They're going to have a lego room, an iPad room, there's going to be a calming center, a haircut hut (MyFoxDetroit.com, May 21, 2015)."

Busch Hero: In 2014 Damian Sharbowski was named a Busch Hero in recognition of the hardwork he does to make a difference in his hometown.

Social Media: You can follow Damian Sharbowski and his work at the following social media areas.


Special thanks to Damian Sharbowski for being an Autism Light. Damian is an example of the difference hardworking fathers can make in the autism community.

Autism Light honors diverse heroes to the world of autism.
Posted by Alan Stokes at 9:29 AM