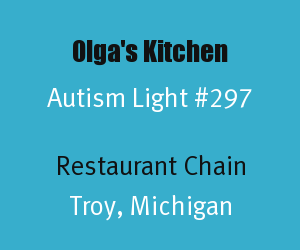 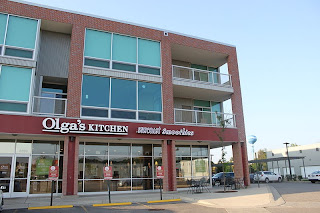 Olga's Kitchen is a Greek style family restaurant chain that was founded in 1970 by Olga Loizon.  The headquarters of Olg'as Kitchen is in Troy, Michigan and most of their 36 franchises are presently located in the state of Michigan, but they have also have small number of restaurants that reach as far as Ohio, Illinois, and Missouri. Olga's Kitchen is an Autism Light because they are giving a portion of the proceeds from the sale of their entree salads in August, 2013 to the Autism Alliance of Michigan and also have a franchise doing a fundraiser for the Gideon Academic Center, Inc.

Here is a video of Olga Loizon explaining how she came to start Olga's Kitchen.

Gideon Academic Center: In addition to their support for the Autism Alliance of Michigan, the Olga's Kitchen franchise located in the Woodland Mall in Grand Rapids, Michigan will be also do a fundraiser to benefit Gideon's Academic Center on Saturday, August 24, 2013.

You can find out more information on Olga's Kitchen on the following social media areas:
Olga's Kitchen also has a Wikipedia Page.
Special thanks to Olga's Kitchen for being an Autism Light and helping the Autism Alliance of Michigan. It is hoped that Olga's Kitchen support of the cause of autism will encourage other businesses to likewise consider partnering with their local community autism associations to help shine a light for autism.

Note: Autism Light is a neutral blog and we have no relationship to the business featured in this post nor is their any expectation of personal gain by sharing this information.
The photo of the Olga's Kitchen in Ann Arbor, Michigan is in the Creative Commons and is credited to Dwight Burdette.
Posted by Alan Stokes at 10:24 PM