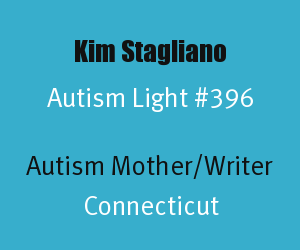 Kim Stagliano is an Autism Mother from Fairfield City, Connecticut. Kim and her husband Mark have three daughters, Mia (age 20), Gianna (age 18), and Bella (age 14), who all have autism. Kim Stagliano is an Autism Light for her dedication as an autism mother, advocate, writer, and for being the managing editor of the popular Age of Autism Website.

The following is a video where Kim Stagliano talks about her three daughters.

The following is a video featuring Kim Stagliano that celebrates the 10th Anniversary of Generation Rescue and the work of its founder JB Handley.


Kim has extensive writing experience at online websites that include: Age of Autism , Huffington Post , Debutante Ball, Dallas Morning News Moms Blog , and The Autism File. Kim also speaks at national autism conferences and has appeared on Good Morning America (with the kids!), ABC News, Fox News, The Chicago Tribune, The National Catholic Register, and on blogs around the world (Bio on KimStagliano.com).

Several of her blog posts have gained national attention, including a recent one she did for the Washington Post called "My Three Daughters are Autistic. I Despise Autism Awareness Month". In this article, Kim says:


I dread April, which has been designated as Autism Awareness Month. As mom to three young women with autism – ages 20, 18 and 14 – I eat, sleep and live autism every day. My youngest daughter, Bella, can’t speak a word and was abused on a school bus, leading to a criminal case. My oldest, Mia, had hundreds of grand mal seizures a year from ages 6 to 10. My middle child is wracked with anxiety. For all three, I have to cut their food, tend to their monthly feminine needs, and bathe them. They will need that daily living assistance forever; when I die, a stranger will have to do those things for them. That is why I bristle at the festive tone of April, the suggestion that the circumstances of my daughters’ existences are to be celebrated. For me, this should be a month of solemn acknowledgement and education about a global crisis (Orange You Glad It's April).

Author: Kim Stagliano is the other of the following three books.

Faith:  A look at Kim Stagliano's past experience with special education catechism classes in the Catholic Church can be found in the article by Joseph Pronechen called Special Needs, Sanctifying Deeds - Catechizing the Developmentally Disabled that appeared in the National Catholic Register on October 16, 2009.

Advice to Mothers: Kim Stagliano shared this word of encouragement with Autism Light for autism mothers on Mother's Day, "You are NOT alone - we are a close family even when we differ on cause. Autism Moms will always reach out to help one another because we understand the 'walk'."

Treatment Ideas: Autism Light asked Kim Stagliano what treatments for autism may have helped her family over the years and she said that the most important thing is diet. Kim has her daughters on a gluten free diet. Also, she suggests speech that has an OT and sensory component as having the potential to be helpful.

Passions: Kim Stagliano shared with Autism Light her three most important passions about autism advocacy. They are as follows:
Social Media: You can follow Kim Stagliano and her work as an author and editor on the following pages.
Special thanks to Kim Stagliano for being an Autism Light. Kim is representative of the dedicated autism mothers who we salute on this Mother's Day 2015. She is also part of a smaller group of autism mothers who have multiple children on the autism spectrum. We wish Kim Stagliano all the best in her role as an autism mother, advocate, and writer. We expect to continue to hear good things in the future about the difference she is making and the light she shines for autism.

Photos: Photos in this post are used with permission of Kim Stagliano.
Posted by Alan Stokes at 6:55 AM