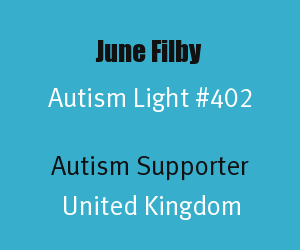 June Filby lives in Pitmedden, a rural village in Scotland in the United Kingdom. June Filby is an Autism Light because for the past five years she has raised valuable funding for the autism charity Speur-Ghlan through her knitting.

June Filby has been "knitting scarves, hats, toys, tea cosies and cushions on behalf of her daughter Ruth Glynne-Owen's charity Speur-Ghlan (Inverurie Herald, May 10, 2015)." She has raised 12,000 pounds to help the autism charity Speur-Ghlan.

Speur-Ghlan is a registered charity in Scotland SC041778. The word Speur-Ghlan is a Gaelic term that means "Blue Skies". They use the Pivotal Response Therapy (PRT) in their early intervention autism services. Read more on the work of Speur-Ghlan at their website at www.earlyinterventionscotland.org.

Social Media: You can find out more about the organization Speur-Glahn that June knits for at the following social media pages.

Wow, this champion mum has made £12,000 knitting for her daughter Ruth's Scottish ABA charity - Speur-Ghlan Early...
Posted by ABA4All on Saturday, May 2, 2015

Special thanks to June Filby for being an Autism Light. June is an example that one can make a difference for autism by using one's simple talents such as knitting. The special support from people such as June Flby is essential to many autism charities across the world. We wish June the best in her knitting.

Autism Light honors diverse heroes to the world of autism.
Posted by Alan Stokes at 7:28 AM