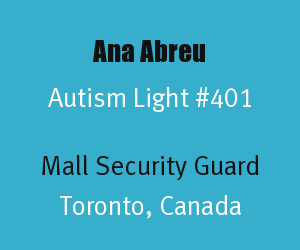 Ana Abreu is a security guard at the Promenade Mall in Thornhill, Canada, a suburb of Toronto.  Ana Abreu is an Autism Light because in March of 2013 she helped a teenager with autism named Cliff McIntosh, who was having a difficult time in the mall where she was worked.

In March of 2013, Cliff McIntosh became overwhelmed because he lost his sunglasses at the Promenade Mall in Thornhill, Canada. His mother Laura Kirby-McIntosh struggled to control him in the ensuing meltdown. Ana Abreu was a security guard at the mall who arrived on the scene and helped Cliff make it through this rough time.


Through it all, though, I remember Abreu. She spoke to me calmly, reassured me that I was doing a great job and helped to keep the people around us safe. I remember feeling comforted by her presence, knowing that we were safer as a result of her help. I remember her listening to me while I told her a bit about my son’s story, and laughing with me as I tried desperately to relocate the sense of humour I frequently use to get me through my hardest moments (Laura Kirby-McIntosh, Parents of Autistic Children Rely on 'Angels' such as Ana, The Star.com, May 15, 2015).

Ana Abreu is presently volunteering with the Toronto Police Force and hopes to one day join its Mobile Crisis Intervention Team (Laura Kirby-McIntosh, Parents of Autistic Children Rely on 'Angels' such as Ana, The Star.com, May 15, 2015). For more information on Ana Abreu receiving the Community Hero Award read the Paladin News Release on May 21, 2015.

Special thanks to Ana Abreu for being an Autism Light in her job as a mall security guard. Ana Abreu received her Community Hero Award on behalf of all the unknown people who offered to help Cliff and his mother at the Promeade Mall in March of 2013.  Likewise we present this Autism Light to Ana Abreu on behalf of all the other security guards and other nameless individuals who have been a tremendous blessing when the stepped into help people with autism and their parents during public meltdowns.

Autism Light honors diverse heroes to the world of autism.
Posted by Alan Stokes at 1:36 AM