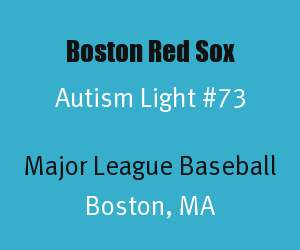 The Boston Red Sox have supported autism since 2001, when they held their first fundraiser on behalf of the National Alliance of Autism Research (NAAR). NAAR merged with Autism Speaks in 2005 (Red Sox to Celebrate Autism Awareness Day at Fenway Park, MLB.com).


I've been wanting to come here (to Fenway) with my kids for a while--in fact, I have a younger child, who is a typical child, and it didn't feel right just taking him. But now that we have days like this that are welcoming for the intimidated, I think it's going to allow for more families, more families with autistic kids to attend wonderful games like this. I'm really thrilled to say that I have my two kids here with me for the first time in my life, a lifelong dream of mine (Boston Red Sox Host Autism Awarness Day, Autism Speaks).


2007 National Anthem: The following event from the Boston Red Sox Disability Awareness Day in the Summer of 2007 epitomizes the organization's inspirational outreach for autism and disabilities. This is a video clip where a man with autism is offered a helping hand in finishing the National Anthem after he gets nervous in the middle of the song.