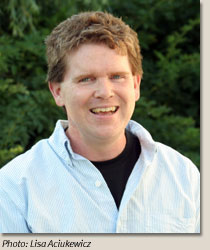 Jamie Manning lives in Boston, Massachusetts and works in the marketing field. He is a father of a child with autism and is also a musician who wrote an album of music focused on autism. Jamie Manning is an Autism Light for sharing his heartfelt music and writing on the theme of autism and parenting.

Jamie Manning has had an interest in music since he was very young and he wrote his first song at age 10. Almost three years after his son was diagnosed with autism, he began to write an album of songs to show how parents struggle with autism.


I dedicate What Remains to the parents who are fighting the good fight every day to give their special children a chance in this world. They fight insurance companies that will not pay for critical therapy, school systems that blithely ignore federal laws while providing inadequate services, and a bevy of carpetbaggers who exploit their desperation to find a cure in order to make a fast buck. They are often abandoned by family and friends and judged by those who know nothing of their struggle. They give up their homes, retirement savings, and any other assets to move their children as far as they can into this world. Yet despite all this, they are some of the kindest, most generous people I've known. You will rarely find people as courageous.

Autism Supporter:  Jamie Manning conducts charitable concerts for autism.  In addition, a portion of the sales of his songs is donated to Autism Speaks.

Writer: Jamie Manning was featured in the book, Autism, Heartfelt Thoughts From Fathers.  He wrote a section called "Casualities of War".

Grant Award:  In 2009 Jamie Manning won a Passim Iguana Music Fund Grant. On his Facebook Group he indicated the grant was going to be used to build a home studio so he could finish a second album on autism. To join his Facebook Group go to this link.

For more information on Jamie Manning visit his website at www.jamiemanning.com or www.autismsongs.com.

Photo: Photo in this post used with permission of Jamie Manning.