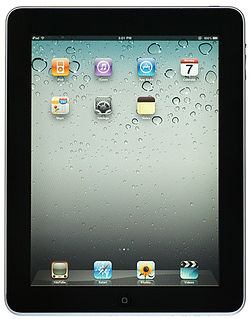 Steve Jobs and Apple Inc. created the iPad. It was first released on April 3, 2010.  The iPad is an Autism Light because of the amazing way it is being used as a resource to help people with autism learn, communicate, and have fun. It is also being used by parents and professionals to improve teaching of people with autism. This is the first time an inanimate object has been made an Autism Light.

The iPad is a tablet computer-like device that uses various Apps to do different functions. It requires the user to touch the screen to interact with programs. The iPad can access the Internet through WiFi and and a high end model can also access it without WiFi through the 3G network. In two years there are now hundreds of Apps for the iPad being created to help people with autism. The iPad is very portable and light weight and can be used for people with autism both in home and school environments.

The video below was produced by Apple Inc. and shows how the iPad is being used to specifically help those with autism.

The following is a video by a mother of a child with autism reviewing some useful Apps that can be used with the iPad.
Here are some resources for additional information on the iPad as it applies to autism.
Facebook:  You can follow the iPad page on Facebook and you may also find the iPad for Autism Facebook page to be helpful in keeping updated on how to use the iPad for autism. Wikipedia: You can also visit the iPad's Wikipedia page. Special thanks to Apple and Steve Jobs for creating the iPad. Autism Light was saddened along with the whole world to hear of the death of Steve Jobs, but there is a sense in which Steve Jobs will live on in the autism community through the iPad. For a list of iPad apps that have been featured by previous Autism Lights visit our Apps page at Autism Light. You may purchase the iPad from the Apple Store. Autism Light honors diverse heroes to the world of autism.
This Autism Light post went into syndication at Autisable.
Posted by Alan Stokes at 4:37 PM