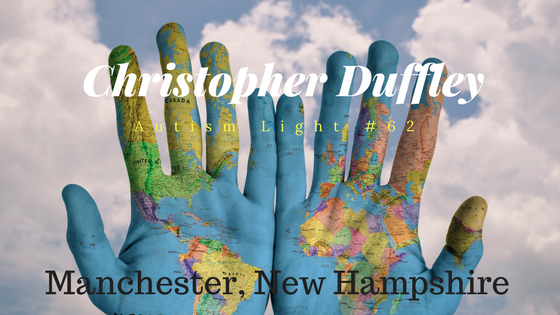 Christopher Duffley was born in May 2001. He lives in Manchester, New Hampshire and is blind and has autism. His disabilities have not stopped Christopher from inspiring millions of people around the world as a musician, and more recently as a podcaster. He primarily sings Christian and patriotic songs. In 2014, his family created Know Greater Love Ministries. Christopher Duffley is an Autism Light for sharing his musical talent and inspiring people with his splendid voice and amazing life story.

ABC News 20/20 did a segment on Christopher Duffley in 2016. The news story gives an inspirational look at Christopher's life.

Christopher has been blind since birth. He was born premature and weighed only 1 pound and 12 ounces. Steve and Christine Duffley adopted him in 2003, and they have encouraged his musical talent since he was a young child. The story of his early life is on his YouTube Channel.

Christopher Duffley sings Christian worship at churches and patriotic music at sporting event venues like Fenway Park and NASCAR. One of his international performances took place in 2015 when he was part of the World Meeting of Families in Philadelphia during the visit of Pope Francis.

Christopher Duffley's rendition of the Christian worship song Open the Eyes of My Heart, performed in Concord, New Hampshire in 2011, went viral and was seen all over the world. Millions of viewers have seen one of the various versions on the internet of Christopher singing this song.

Albums: Christopher Duffley has produced two albums. Eyes of My Heart was produced in conjunction with Steven Taylor in 2012 and in 2015 he released Believer with his sister Grace. You may purchase those albums at the product store on his website.

Podcast: Christopher Duffley has a podcast called Mission Possible that he launched in April 2016. He has done almost 75 podcasts as of May 2018. You can access his podcasts through his website.

Awards: In 2013, Autism Speaks named Christopher to their honorable list of "10 amazing individuals with autism who shined".

Social Media: You may follow Christopher Duffley at the following Social Media.
Special thanks to Christopher Duffley for being an inspirational singer and a living legend that shines to the world through his blindness that people with disabilities can accomplish great things. We couldn't begin to cover all of his performances and accomplishments in this profile, but we are eager to follow the ongoing growth of his career and are confident that his efforts will continue to bless the autism community.

Photo: The Photo in this post was received from Christopher Duffley's family for use here.
Posted by Alan Stokes at 7:28 AM