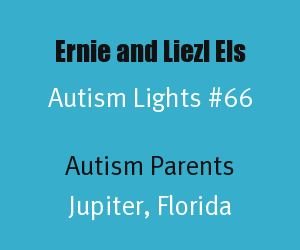 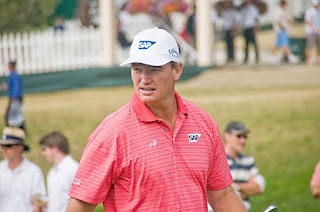 Ernie and Liezl Els have a son named Ben who has autism. Ernie Els was born in Johannesburg, South Africa. Ernie and Liezl currently live in Jupiter, Florida. They also have lived in London, England. Ernie and Liezl Els are Autism Lights because of their establishment of the Els for Autism Foundation and their ongoing advocacy for autism.

Ernie is a professional golfer who is known as the "Big Easy".  In 1986, Ernie Els was the youngest player to win the South African Amateur. There is now a Ernie Els SA Primary School Championship.  His career has been marked with consistent excellence. In 2011 he was elected to the World Golf Hall of Fame. Ernie Els' PGA tour page lists his current career statistics.

2012 British Open Win:  On July 22, 2012, Ernie Els won the British Open. The Golf Channel.com said, "Remarkably, Els now has won majors in three decades, and it is his fourth major championship overall. He moved to No. 15 in the Official World Golf Ranking (Golf Channel, July 22, 2012)."

ESPNmedia Video: The following ESPNmedia video tells the story of Ernie Els and his family's story of autism, which they call "A Father's Love".


It will focus on a global digital learning platform that will give children on the spectrum around the world access to best practices in education and therapy. It will also connect the international autism community with best practices and the latest information and research. The first of its kind Center will also have an on-site education facility, medical and professional services, research and transition to adulthood.

The Els gave $6 million of their own money towards the campaign and are also working hard to raise the remaining need. The following is a PGA Tour video about Ernie Els' fundraising cause. Ernie Els concludes the video by saying, "We have to believe that anything is possible. That it is possible to find a cure and we will find a way of a better life for kids and families living with autism. I don't know if one day I'm going to be remembered as a golfer or a guy that's actually taken autism to the public, and I like the later."
Els for Autism Golf Challenge:  One of the primary ways money is raised for the Els for Autism Foundation is through the Els for Autism Golf Challenge. The challenge consists of 30 regional events with the finals for this year's event to be held October 19-20, 2012 in LasVegas, Nevada. The event has become the world's largest charity golf tournament. Els for Autism Mountain Climbing:  Liezl and her daughter Samantha climbed Killimanjaro (the largest mountain in Africa) to raise money for the Els for Autism Foundation.  A blog on their efforts is at this link. Autism Speaks Public Service Announcement:  The following PSA from Autism Speaks features Ernie Els.
For more information about Ernie Els visit these websites.

You can also follow Ernie Els on this Social Media.
Special thanks to Ernie and Liezl Els for being Autism Lights and responding to your son Ben's diagnosis of autism by creating an autism foundation that can benefit thousands of children around the world. Autism Light honors diverse heroes to the world of autism. Photo: The Photo of Ernie Els is in the Creative Commons of Wikipedia and is attributed to SD Dirk.

This Autism Light post went into syndication at Autisable.
Posted by Alan Stokes at 4:00 PM