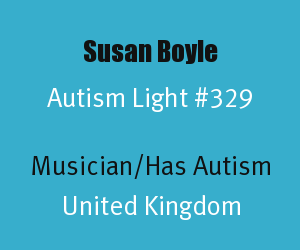 Susan Boyle is a 52 year old singer from Scotland in the United Kingdom. Susan Boyle gained international fame on April 11, 2009, when she was a sensational success in her singing debut on Britain's Got Talent, where she sang "I Dreamed a Dream" from Les Miserables. After Susan Boyle's surprise debut performance, she went on to become a professional singer and actress. Her debut album was the fastest selling debut album of all time in the United Kingdom.

Susan Boyle revealed in December of 2013, that she had been diagnosed about a year ago with Asperger's Syndrome, a high functioning form of Autism. Susan Boyle is an Autism Light for how the sharing of her diagnosis of autism can help raise understanding and acceptance of autism by adding to the list of autism legends in the music field.

Here is the full clip of Susan Boyle's 2009 audition in Britains Got Talent. Notice how her amazing singing ability surprises everyone. This video version of that night has received over 141 million views on YouTube to date. I personally never tire of watching it again.
Susan Boyle told the Guardian regarding her autism diagnosis, "I was told I had brain damage. I always knew it was an unfair label. Now I have a clearer understanding of what's wrong and I feel relieved and a bit more relaxed about myself (The Guardian, December 7, 2013)."

The National Autistic Society considers Susan Boyle an example of the 'invisible generation' of adults with autism that went undiagnosed for years (BBCNews Scotland, December 9, 2013).

The following is a news story from CNN about Susan Boyle being diagnosed with autism.

Author: In 2010 Susan Boyle wrote the book The Woman I Was Born to Be: My Story.

Christian Faith: Several of the songs that Susan Boyle has given to the world on her popular albums are about the Christian faith. Susan Boyle credits her Christian faith for helping her cope with grief when she lost her beloved mother Bridget in 2007. She said, "That's what keeps you going. I have my faith, which is the backbone of who I am, really."(Christianity Today, November 17, 2009).


Website: To keep informed of the latest developments with Susan Boyle visit her website at www.susanboylemusic.com or you can interact with other fans at the Susan Boyle Fansite.
Wikipedia: You can find out more about Susan Boyle's life on the Susan Boyle Wikipedia Page.

Social Media: You can follow Susan Boyle on the following social media areas.

Special thanks to Susan Boyle for being an Autism Light. We expect to continue to hear amazing things from her as she shares her gift of music and represents adults with Asperger's through her example and growth.


The photo of Susan Boyle in this post is in the Wikipedia Commons.
Posted by Alan Stokes at 9:45 AM