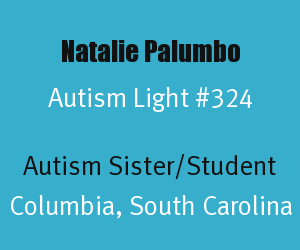 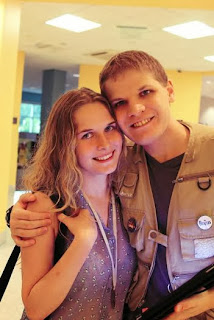 Natalie Palumbo is 19 years old, and a college student at Ringling College of Art and Design in Florida. Her home is in Columbia, South Carolina. Her older brother Anthony has low-verbal autism. As a sibling of an individual with autism, Natalie takes very seriously a responsibility to care for her brother over his lifespan and she is a natural advocate for autism. Natalie currently serves as the sibling voice for the Age of Autism web newspaper. Her relationship with Anthony is an inspiration to other autism siblings and families. Natalie Palumbo is an Autism Light for the difference she is making in the life of her brother who has autism and how her creative art and writing encourages the greater autism community.

Artist: Natalie just successfully completed her first semester at Ringling College of Art and Design in Sarasota, Florida with an A average. She hopes to work in visual effects in film and animation. Natalie became interested in art at an early age, because drawing helped her cope with the isolation imposed by autism and was the only way she could communicate with her brother. Some of her artistic achievements already include:
Here is the Public Service Announcement that Natalie Palumbo created on autism awareness for Age of Autism in the Notre Dame High School National Film Festival.


Here is a news story done on Natalie Palumbo and her relationship with her brother in October of 2012.


Natalie Palumbo offered this perspective to Autism Light on finding a cure for autism. 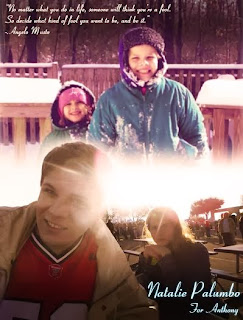 Growing up, those who thought of autism only as a verbal condition criticized me for wanting a cure for my brother. They actually asked me,
“If you love your brother so much, why do you want a cure?”

They did not understand how Anthony’s low-verbal autism made him vulnerable to danger, and how lack of communication limits his life. Anthony will need lifetime care. I feel it’s important to identify the cause of autism to prevent it as well as treat it. Some people with autism are gifted and verbal, but only represent about 30% of the spectrum. I responded to criticism by saying…

“If you can argue against a cure, you don’t need one. For those without a voice, we can never stop fighting for a cure. We cannot neglect the many for the exceptional gifts of the few.”


Age of Autism: The Age of Autism is a Daily Newspaper on the Autism Epidemic that is Edited by Dan Olmsted, Kim Stagliano, and Mark Blaxill. Natalie Palumbo serves as the Sibling Voice for Age of Autism. Her writing on this daily web newspaper on autism is having a significant impact. You can access the over 20 posts she has written through her page on Age of Autism.  Some of her favorite posts include:

Autism Light asked Natalie how her relationship with a brother with autism impacts her life and she said this:


Anthony keeps me young. He is immune to the world’s negativity. It
is a blessing and a curse for me. Anthony is unaware when people
are intolerant, so I hurt for the both of us. It does comfort me that he
is unaware of people’s ability to be cruel. I can escape into his world
where our childhood is never-ending. He still thinks of me as 6 and
him as 9. Anthony acknowledges that I’m in college, but his interaction
with me remains frozen in time. Anthony speaks in chunk phrases from
his echolalia. He will repeat a phrase, and change certain words to
suit his message. This is how he copes with having no conversational
speech. This results in funny phrasing that we call “Anthonyisms”. I
started a Tumblr at the suggestion of one of my friends who enjoyed the
Anthonyisms as my Facebook statuses. Anthony inspires my art. He is
highly visual to compensate for being low verbal. I focus on whatever
captures Anthony’s attention. I try to see the world through Anthony’s eyes.

Here is a video of Natalie and Anthony dancing to a light hearted song together.


Being Anthony’s only sibling, Natalie anticipates being his caregiver one day when her parents are no longer able. Special thanks to Natalie Palumbo for being an Autism Light as a sibling voice for autism. Her thoughts challenge the autism community to listen to autism siblings to make sense of the puzzle of autism. We look forward to continuing to hear about the great things Natalie will do in the future to raise awareness for autism.