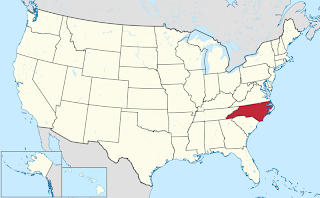 The State of North Carolina is the home currently to 10 Autism Lights, a football team,a football quarterback, 3 autism fathers, a musician, an autism uncle, a camp, a leader of organizations for special needs, and a psychologist.

You may reach all these posts by searching the blog through the "North Carolina" Label.

The map of North Carolina is from the Wikipedia Commons.
Posted by Alan Stokes at 6:09 AM