Autism Light #326 is the Kmart in Bateau Bay. 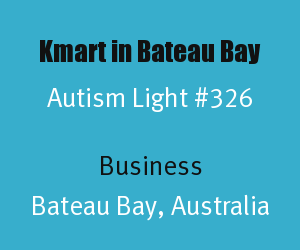 Jenny O'Donnell is a single mother who had purchased some Christmas gifts on layaway for her two children. She has a daughter Eliza and a son named Connor who is 15 and has autism. Connor's gifts included a popular Skylanders toy and some DVDs.

Jenny O'Donnell had paid for the items at layaway but then left them at the check-out counter when she purchased some other items. When she returned to get them they had been taken.

Mike Charlton, the store manager of the Kmart in Bateau Bay, said, "It was very unfortunate that this should happen. Christmas is about making people happy (Kmart replaces Christmas gifts stolen from autistic teenager, The Telegraph, December 23, 2013)."   After hearing of her loss Mike Charlton decided that his Kmart store would replace the Christmas gifts that Jenny O'Donnell lost at the checkout counter.

Special thanks to the Kmart in Bateau Bay, Australia for setting an example for other businesses in kindness toward autism families. The generosity of this business made a difference in Jenny O'Donnell's family and is an inspiration at this time of the year.

Autism Light honors diverse heroes to the world of autism.
Posted by Alan Stokes at 8:41 AM