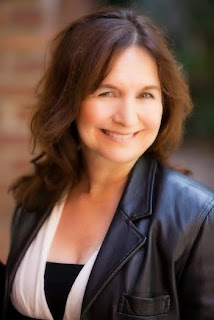 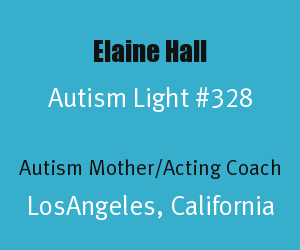 Elaine Hall (AKA 'Coach E') is a former Hollywood acting coach and the Founder and President of The Miracle Project, a creative arts project for autism students in Los Angeles, California. Elaine Hall's son Neal Katz, who she adopted from an orphanage in Russia, is an adult now who has autism. Elaine Hall is an Autism Light because of how her vision and passion for The Miracle Project has taken positive action to shine a light for autism. Elaine's work is an inspiration to the entire autism community, but especially within the Jewish community.

The New York Times has called Elaine Hall the 'Child Whisperer' for her amazing gift as an acting coach. The Golden Hat Foundation website says this about Elaine Hall.

She has been the subject of articles in The Los Angeles Times, The New York Times, The Wall Street Journal, The Jerusalem Post, among many others and has appeared on CNN, CBS News, Oprah Radio and NPR. Elaine has coached children on numerous TV shows and films which include Honey I Blew Up the Kids, The Flintstones, and Akeelah and the Bee (The Golden Hat Foundation Biography for Elaine Hall).

Autism Mother: Elaine Hall is first and foremost an Autism Mother who is dedicated to her son Neal Katz, who was adopted from Russia, all the while maintaining an ambitious work that helps other families. The following is an interview Elaine Hall did with Autism Live about her life with her son Neal and her use of the dramatic arts to join his world.


Elaine Hall on Labels: Elaine Hall uses the following illustration to break down the stigma of the high functioning/low functioning labels often used in autism. She says,


Multiplatform socialization program that enables children and teens with autism and other special needs to express themselves through music, dance, acting, story, and writing. ALL children of ALL abilities grow in skill and in spirit while creating and performing in original musicals (The Miracle Project Website).

Author: Elaine Hall is the author of the book Now I See the Moon: A Mother, A Son, and the Miracle of Autism, which is her memoir and was published in 2010. You can purchase her book from the publisher HarperCollins Publishers. Now I See the Moon received praise from two other Autism Lights.

Elaine Hall is also the co-author along with Diane Isaacs of Seven Keys to Unlock Autism: Making Miracles in the Classroom, written in 2012. This book offers help in how to make meaningful connections with children with autism.

Blogger: You can read articles written by Elaine Hall at the following links.

Website: If you want to learn more about Elaine Hall's ongoing work you can check out her website called Coach E on Autism.

Elaine Hall on Empathy: Elaine Hall believes individuals with autism have empathy and she explains what she means in this way,

Some people say that individuals with autism lack in empathy and emotion.  I find the exact opposite to be true.  My friends, students, colleagues with autism are some of the most sensitive people I have ever had the privilege to know.  They may show their affection in different ways than neurotypicals do i.e. my son might smell someone he favors, or will touch someone's shoulder to show he cares.  But the sensitivity is there (Elaine Hall, Email to Autism Light, 12/27/2013).


Social Media: You can follow Elaine Hall on the following social media.

Speaker: Elaine Hall is available for speaking on autism to groups. For more information you can find contact information for her on her website. She is also is involved in speaker's bureau's including:
World Autism Day-2013: Elaine Hall spoke at the United Nations for World Autism Day in 2013. A clip of her speech is available in a news story at the Vista Del Mar website.

Special thanks to Elaine Hall for being an Autism Light. Her leadership in The Miracle Project and as a writer, autism mother, and autism advocate is an inspiration to the autism community. Elaine's special projects for the Jewish community serve as an inspiration to those within that community who have autism or special needs.

The photo in this post is used with permission of Elaine Hall.
Posted by Alan Stokes at 8:30 AM