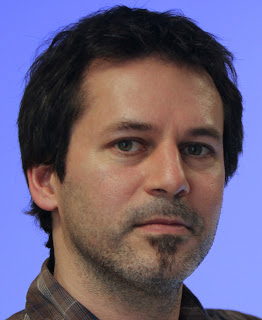 David Niemeijer is from Amsterdam, The Netherlands. He is the founder and CEO of AssistiveWare, a company that develops software and apps for mobile devices that meet the needs of disabled people. While the apps developed by his company serve people with a variety of disabilities, they are widely used in the autism community for assisting with communication. David Niemeijer is an Autism Light for operating a business that creates apps that open up the world of communication to people with autism.

David Niemeijer has a PhD in environmental and agricultural sciences from Wageningen UR. David had a friend named Giesbert Nijhuis who broke his neck in a serious car accident in 1995. In order to help his friend access his computer, David developed KeyStrokes, an on-screen keyboard for the Mac so that Giesbert could use a HeadMouse and access keyboard shortcuts in Photoshop that were critical to his work as a graphic designer. Giesbert's work is at his website is at www.laesieworks.com. For more on Giesbert Nijhuis' story see this link.

In order to meet public requests for a wider audience in the disability community to be able to use the original KeyStrokes product, David created a software development business called AssistiveWare in 2000 with the aim to serve the unique needs of people with disabilities. Some of the diagnosis addressed by their software besides autism, include apraxia, speech delay, Down Syndrome, cerebral palsy, strokes, traumatic brain injury, and ALS. 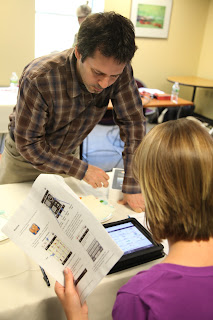 When mobile devices and the iPad were created AssistiveWare adapted its business to also create products for them. There are two apps from AssistiveWare that may be particularly useful for some in the autism community.

A complete list of other products is available at AssistiveWare's product page.


David Niemeijer said this as an explanation as to why the iPad is such a popular device for the autism community to use for communication.


Proloquo2Go has been widely used in the autism community - just over half of our users are on the autism spectrum. Part of this success is based on he fact that the iPod and iPad are "cool" devices - they're mainstream, lightweight, and don't stigmatize the person who uses them as being different, as some dedicated AAC devices may do. They also offer access to many educational and leisure apps that are simple and intuitive to use, and can be highly motivating to people with autism.

The following is a video where a boy named Nick who has autism benefited from being able to use Proloquo2Go on his iPad. AssistiveWare has a video project page on their website, where one can find other videos that show case studies of people using their apps.


Social Media: There are a variety of pages on social media that one can interact with AssistiveWare and David Niemeijer's work there.
The best way to learn more about AssistiveWare is at their website at www.assistiveware.com. For other information on David Niemeijer you can read an interview that the Thinking Person's Guide to Autism blog had with him in March, 2012.

If you liked this post you may want to read other posts at Autism Light with the label iPad.

Photos: The photos in this post were used with permission of AssistiveWare.

Disclaimer from AssistiveWare: Note that the video above of Nick presents an unscripted case study and any statements made in the video pertain to this particular case and are not intended as a comprehensive product evaluation or recommendation. Different people have different needs and it is always recommended to get an AAC evaluation from an expert.
Posted by Alan Stokes at 8:17 AM