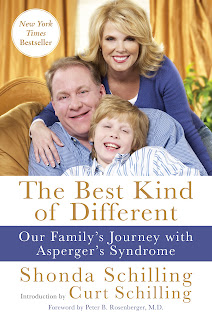 Curt and Shonda Schilling live in Medfield, Massachusetts and have a son with Aspergers named Grant. They have four children, including Grant. Shonda wrote a book about their challenges of dealing with autism and they bring awareness to autism through publicly speaking about their situation. Curt and Shonda Schilling are Autism Lights because sharing their journey with autism as public figures can encourage many other family's dealing with similar challenges.

Curt Schilling: Curt Schilling is a retired major league baseball player. He won 216 games and had over 3,000 strikeouts in his 20 year career that concluded in 2007. Curt Schilling is remembered for many all star achievements on the field, including his ace pitching in the post season where he helped both the Arizona Diamondbacks and Boston Red Sox win World Series titles. He is especially remembered as the workhorse who pitched the Boston Red Sox to victory over the New York Yankees in the 2004 American League Championship, despite having an ankle injury that led him to pitch with a bloody sock. Curt Schilling's careers stats can be found at Baseball-reference.com. In his retirement Curt Schilling continues to operate his company 38 Studios which he started in 2006. 38 Studios creates entertainment products, including video games, toys, and comics.

The following is a CNN interview in which Curt and Shonda Schilling discuss raising their son Grant who has Asperger's Syndrome.


Photo: The photo in this post was used with permission of The Best Kind of Different website.

This post went into syndication on Autisable.
Posted by Alan Stokes at 2:23 PM