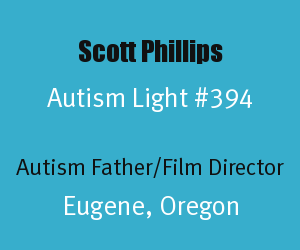 Fan Blade Films: Scott Phillips began looking for resources to help him as an father of a child with autism after he received his son's diagnosis. He writes, "I started looking for information on autism from a father's point-of-view. There wasn't much to be found so I decided to do something about it. I started Fan Blade Films and began work on a film that would offer comfort and hope to the thousands of fathers who find themselves in the same situation that I found myself in (Fan Blade Films)."

Through Fan Blade Films, Scott Phillips directed, produced, edited, and shot the film Do It Differently, a documentary about the unique role of autism fathers. Mike Whitty, Damian Goble, Jonathan Ayers, and Mike Guido have one thing in common, they are all fathers raising a child with autism. In Do It Differently they share their struggles and successes...fears and hopes...while projecting a quiet strength. Through the film they can inspire others to do it differently. You can watch a trailer of Do It Differently or view the entire film below.

Scott Phillips says, "An autism diagnosis can shake the foundation of any family, but it isn't the end, it's just a different path. For all fathers who feel lost, scared, and helpless I hope the film "Do it Differently" inspires you to want to do more for your child who is different than expected. You are not alone (Fan Blade Films)."

Scott Phillips is currently working on a follow-up film to Do It Differently. He tells Autism Light that, "Although it will be a narrative film and not a documentary, the subject matter will be similar and I hope to bring even more attention to the fathers who work hard every day raising their children and doing the right thing." There is currently a GoFundMe Page seeking to raise $6,800 for a camera to create more autism films.

Social Media:  You can follow Scott Phillips at the following social media areas.

Special thanks to Scott Phillips for sharing his gift of video production to raise autism awareness. We wish Scott all the best in the future as an autism father and autism advocate. We look forward to future films coming from Fan Blade Films.

Photo: The photos in this post were used with permission of Scott Phillips.