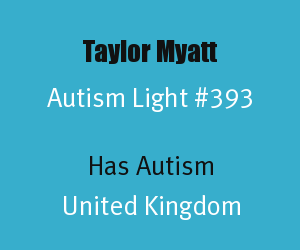 Taylor Myatt is a 4 year old boy who has autism and cannot speak. He lives in Birches Head, Stoke-on-Trent in Straffordshire, England. On April 9, 2015, there was a gas leak in his home in the middle of the night and he woke up his parents to alert them to the danger. Taylor Myatt is an Autism Light because by alerting is parents he was a hero that prevented the gas leak from harming his family.

Taylor's parents Rebecca Coogan and Lee Myatt were sound asleep in the middle of the night of April 9, 2015. Taylor went into their room and woke them up and he was able to convince his father to go downstairs. The gas leak was discovered and they were able to call their emergency after hours number for a gas leak.

Taylor's mother Rebecca Coogan said that Talor, "was trying to pull Lee out of bed and he wouldn't go back into his own room. Taylor can't talk, he just points when he wants something, but he was adamant he was going downstairs (As quoted by Laura James, Stokes Sentinel, April 14, 2015) ."

Rebecca Coogan added, "Taylor always has his door open at night so I guess thats why he could smell the gas and not us. I don't know how he knew something was wrong. I guess it was just his instincts. But there's no doubt in my mind that he saved our lives (As quoted by Laura James, Stokes Sentinel, April 14, 2015)."

Special thanks to Taylor Myatt for being an Autism Light and demonstrating that one doesn't have to be able to speak to be a hero. Taylor is representative of the many individuals with autism that in the right situation are the first person to sense danger and they are able to find way to get help from others. We wish Taylor Myatt all the best as he develops and grows up.

Autism Light honors diverse heroes to the world of autism.
Posted by Alan Stokes at 9:43 PM