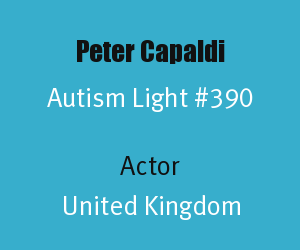 Peter Dougon Capaldi was born on April 14, 1958. Peter Capaldi is a Scottish actor and film director. In 1991 he married Elaine Collins. He lives in Crouch End in the United Kingdom with his wife and daughter. Peter Capaldi is probably best known for being the twelfth and current actor to play the lead character of Doctor Who in the iconic BBC One science-fiction series Doctor Who. Peter Capaldi is an Autism Light for the way in which he has engaged and comforted some of his very special fans who have autism.

Peter Capaldi took classes at the Glasgow School of Art. He has been an actor and film director since 1982. For a complete listing of the television shows and features he has played in visit the Peter Capaldi IMDb page.

Peter Capaldi is an Autism Light for two separate interactions he had in 2014 with two fans who had autism.

Girl with Autism: Here is a video of Peter Capaldi comforting a girl with autism who had been upset about Peter Capaldi replacing Matt Smith as the 12th star to play the role of Doctor Who. He shows the special fan a photo of himself with Matt Smith to emphasize the continuity in the change of an actor.


In the video Peter Capaldi tells the girl with autism, "Matt [Smith] was really nice to me, as Jenna was too. They were both very welcoming to me when I came into the TARDIS. Matt said to me to look after Doctor Who, and he gave me his watch that he wears, and he said that, in his own way, he was happy that it was me that was coming in. So I will do my very best to be as much fun and as friendly as he is (As Quoted in Huffington Post, March 5, 2014)."


Peter Capaldi wrote this letter to Thomas Goodall to encourage him after his grandmother died.


Because you see, when Clara and I are travelling around in time and space, sometimes bad things happen to us.

And you know what, Thomas? Sometimes sad things happen to us to. So, it's nice to know that there's somebody like you out there who's on our side. And you should know that we're on your side too.

So you look after yourself, and take care, and be happy.

Ross Goodall, the father of Thomas, said that he didn't think his son was going to be able to go to the funeral because of his intense experience of grief, but that the message from Peter Capaldi gave his son the courage necessary to attend his grandmother's funeral.

Peter Capaldi uttered a very deep truth when he said, "Real heroes are all around us and uncelebrated (Peter Capaldi IMDb page." At Autism Light we strive to honor real heroes who do something special for the autism family. Special thanks to Peter Capaldi for being an Autism Light. The kindness he showed to two young fans with autism is something they will not soon forget. We wish Peter Capaldi all the best.

Photo: The photo of Peter Capaldi is from the Creative Commons at Wikipedia.
Posted by Alan Stokes at 10:00 PM