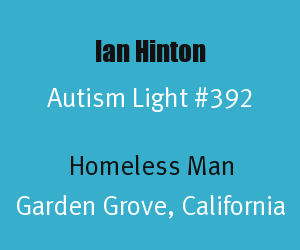 Charles Truong who is 17 and has autism wandered off on April 14, 2015, when shopping with his mother at the Binh Supermarket in Garden Grove, California. Officer David Chang with the Garden Grove Police Department showed his picture to Ian Hinton in hopes he might recognize the teenager out in the community.

The effort by Officer Chang to reach out to Ian Hinton who lived on the streets of the community was successful. A few hours later Ian Hinton did see Charles Truong out on the streets flapping his hands at a busy intersection. Ian asked people to help him call the police to assist getting Charles back to his family. He was ignored by the first two people he asked, but the third person Ian asked for help assisted him by calling 911. Charles Truong was then returned safely to his family without harm.

Here is an news video about Ian Hinton's role in the community finding Charles Truong safely.

Special thanks to Ian Hinton for being an Autism Light. Ian Hinton along with the person who helped him contact the police after he spotted Charles will be honored at a special reception in the future with the Police Chief of the Garden Grove Police Department.