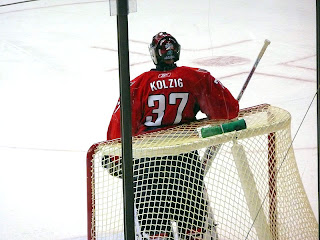 Olaf "Olie" Kolzig is a German citizen who was born in Johannesburg, South Africa. He currently lives in the Washington DC area. Olaf Kolzig has a son named Carson who has autism. Olaf was a professional hockey player who played 17 years in the National Hockey League. Olaf Kolzig is an Autism Light because of the personal impact that his foundation and humanitarian work is doing for the cause of autism.

The following is a heartwarming news story done in 2008 on the impact Olaf Kolzig had on the Atmore-Gilbertsen family from Arlington, Virginia.


ECHL: Before playing in the National Hockey League, Olie Kolzig played two seasons in the ECHL. In 2010 Olaf Kolzig was inducted into the ECHL Hall of Fame. The following is his Hall of Fame Tribute Video.


Other Stories: For more information on Olaf Kolzig read these articles:

Social Media: You can follow Olaf Kolzig on the following social media areas.
Special thanks to Olaf Kolzig for using his athletic star to be an Autism Light. His diverse international background is a testimony to the fact that autism knows no geographical boundary.

Photo: The photo of Olaf Kolzig in this post was taken from the Creative Commons of Wikipedia.
Posted by Alan Stokes at 7:37 AM