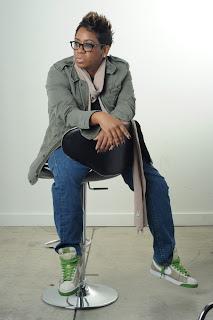 Nia T. Hill is a Writer, Director and Producer from Los Angeles, California. Nia Hill is the Director/Producer of a Documentary film about autism called Colored My Mind. Nia Hill is an Autism Light because by creating the film Colored My Mind she is raising awareness of autism. The film will be especially important in showing how autism impacts the African American community.

Nia Hill has a storied career in the entertainment and media industry. Her first company was called the Solstice Group and then she went on to become the co-creator of Strange Fruit Films. Nia Hill's detailed biogaphy and a photo of her are available at the Strange Fruit Media Website. Her present venture is called Outer Child.

A biography on Nia Hill received at Autism Light described her this way:


Some set out to create their own path; others simply know their calling and carry out each task in light of this calling. Nia Hill is the perfect prototype of the latter. It's rare to find a triple threat who has been blessed with gifts to write, produce and direct with equal skill and passion. A force to be reckoned with ever since her undergraduate career at The University of Oklahoma, to her current venture with Outer Child, and all that has developed in between. Hill has set out to spread knowledge and light in all realms of media.

Here is a trailer of Colored My Mind. The film is expected to be released in early 2012.


Nia Hill's autism film Colored My Mind features the stories of 5 women from the African American community who have children with autism. The five mothers featured in this documentary are Tammy McCrary, Shannon Nash, LaDonna Hughley, Donna Hunter, and Tisha Campbell-Martin. The film's official website is at www.coloredmymind.com. You can also follow the film on their Facebook page. The film has already been presented to the White House and Congress in Washington D.C. in an effort to share the specific autism related needs of the African American community. This film should give legislators information about how pending and future federal autism legislation can impact this demographic.

Special thanks to Nia Hill for bringing this documentary called Colored My Mind to the autism community. We look forward to seeing it and learning much from the stories it will tell.


Photo: The photo in this post was used with the permission of an agent of Nia Hill.
Posted by Alan Stokes at 7:00 AM