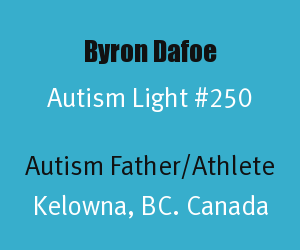 Byron Dafoe was born in Worthing, Sussex, England. At two months of age he moved with his mother to British Columbia, Canada. Byron Dafoe has a son with autism and he is a retired National Hockey League player who helped found Athletes Against Autism. He lives in British Columbia today. Byron Dafoe is an Autism Light for his dedication as an autism father and for his efforts to raise awareness for autism through Athletes Against Autism.

Hockey Career: Byron Dafoe played as a goaltender for the Boston Bruins, Washington Capitals, Los Angeles Kings and Atlanta Thrashers between 1992 and 2004. In 1999, Byron Dafoe was inducted into the Portland Pirates Hall of Fame (Source). His nickname was "Lord Byron". Byron Dafoe's career statistics are available at Hockey-reference.com.

Special thanks to Byron Dafoe for being one of the founders of Athletes Against Autism and using his notoriety to promote autism awareness. Autism Light wishes Byron and his family all the best in their ongoing journey with autism.

Autism Light honors diverse heroes to the world of autism.
Posted by Alan Stokes at 12:14 PM