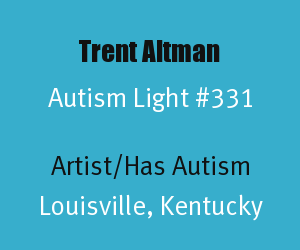 Trent Altman is 35 years old and lives in Louisville, Kentucky. Trent Altman is an abstract, expressionistic artist who has autism. Trent has gained international attention for his outstanding talent in art. His work in art is enabling Trent Altman to earn money and support himself. Trent Altman is an Autism Light for how work is helping spread autism awareness and providing inspiring art for people to enjoy.

2012 United Nations Award: Trent Altman's painting Abstract Garden II was chosen to be on a special United Nations postage stamp in a series in honor of World Autism Awarness Day 2012. He was one of two artists with autism selected from the United States and one of eight artists selected from around the world. 1 million of the stamps were printed by the United Nations Postal Administration (Trent's Studio Website).

Genius of Autism Honoree: In 2012 Trent Altman was one of the New York City McCarton Foundation Award Honorees at the 2nd Annual Genius of Autism event on October 22, 2012. Another artist with autism being honored at the 2012 event was Stephen Wiltshire, who was Autism Light #36. Dr. Jacquelyn Marquette, Trent's mother, wrote a blog post for the Art of Autism on his experiences at the event (The Art of Autism, March 27, 2013).

The following is a news story by WHAS11 on Trent Altman's art. In addition to being an artist Trent Altman has made the amazing transition to living independently with supports.


Trent's Studio: Trent Altman's work has been used by non profits, churches, autism conferences and universities such as the University of Louisville. For more information on Trent's honors and awards with his art visit his website called Trent's Studio at http://www.trentsstudio.com. His website has detailed information about his art.

The following is a news story that Kentucky Life did on Trent Altman in 2013.

Social Media: You can follow Trent Altman at the following social media areas.
Special thanks to Trent Altman for being an Autism Light. Trent's artwork has a profound beauty to it and is an inspiration to those who follow the achievements of some individuals with autism.  We look forward to hearing more exciting things about Trent and his artwork in the future. For more information on artists with autism visit the Autism Light Art page.