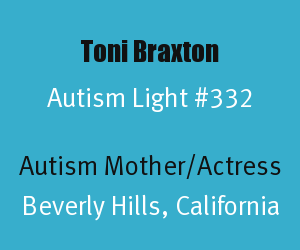 In 2011 Toni Braxton told OK Magazine this about how she reacted to becoming an autism mother.


It’s been rewarding to see how he’s grown, but I remember when I first found out. I remember blaming myself; I thought it was my fault. I wish I knew what triggered it. Still, often, as a mom, I blame myself. I didn’t take my vitamins every day … maybe it was the medications I was on before I got pregnant.”

They haven’t figured out what triggers it, but whatever it is, I don’t care, find a cure. Help my kid; help all the other kids. But I had to shake myself off, and go ‘enough about me,’ and make sure my kid’s OK. Once they diagnosed him, we were able to itemize the issues (Toni Braxton, OK Magazine, April 4, 2011).

Autism Speaks: The following is the Ad Council spot that Toni Braxton did for Autism Speaks.


Lupus: Three years ago Toni Braxton revealed that she has the autoimmune disease, Lupus (Essence, November 18, 2010). Toni Braxton said, "My doctors told me I would never be able to perform again. I'm very lucky that I'm still able to dabble in it a little bit (USA Today, February 6, 2013)." In addition to advocating for autism awareness, Toni Braxton helps raise awareness about Lupus.

Twist of Faith: Toni Braxton starred with David Julian Hirsch in the Lifetime TV movie Twist of Faith that aired on February 9, 2013. Toni's autistic son Diezel made his acting debut with a role in Twist of Faith with his mother. Here is a scene from the movie where she sings her song This Very Moment.

Singer: Toni Braxton is known as one of the greatest R&B singers of all time. Dominique Carson at the Celebrity Cafe wrote an informative article on Toni Braxton's Top Ten Songs of All-Time that includes links to song videos on YouTube where available (The Celebrity Cafe, Top 10 Toni Braxton Songs, March 8, 2013)
The following is a message about autism by Toni Braxton at a Hollywood event sponsored by Lindt of Switzerland.

More Information: For more information on Toni Braxton visit her website at www.tonibraxton.com or check out the Toni Braxton Wikipedia Page.
Social Media: You can follow Toni Braxton on the following social media areas. There are over 1 million followers of her verified Twitter account.
Special thanks for Toni Braxton for being an Autism Light and using her celebrity status to be an advocate for autism. Her talent as a musician/entertainer is without question, and it is all the more remarkable as she balances that with being an autism mother who has Lupus. We look forward to hearing more amazing things from Toni Braxton in the future.
Autism Light honors diverse heroes to the world of autism.
The photo of Toni Braxton is in the Public Domain.
Posted by Alan Stokes at 11:31 AM