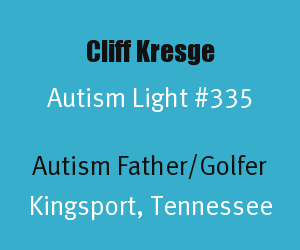 Golfer: Cliff Kresge states on his website that, "I got started in golf at age 8 when my parents moved to the 13th hole of Dubsdread GC in Orlando, FL. My swing is natural. I learned to play the game on my own, without an instructor (Cliff Kresge.Net)." Kresge turned pro in 1991 and made his PGA debut in 1994. You can view his golfing statistics at his page on ESPN. Cliff Kresge was the winner of the 2002 Virginia Beach Open.

Find out more information about Kresge's Krew Foundation on their Website.

The following is a video of Cliff Kresge explaining about the third year of the Kresge's Krew Tourney for Autism Awareness that was held in September, 2011.


After a fundraising event in 2010, Kresge said, "My message with an event like this is that autism isn't some sort of death sentence--autism is something you can function with if you get the proper help. I've learned to appreciate what I have in my life, because I've learned some kids don't have a choice in how their lives go (Golf Week.com, Jeff Babineau, September 16, 2010)."

Special thanks to Cliff Kresge for being an Autism Light. The blessing he is providing to the autism community in East Tennessee is impacting many lives. We wish him the best in all his autism awareness and his ongoing roll as one of our super autism fathers.