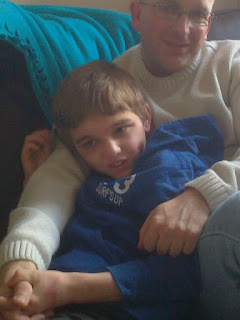 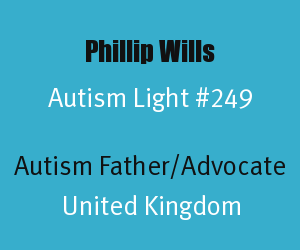 Phillip Wills is an Autism Father from Truro, United Kingdom near Cornwall. Phillip Wills' son Josh is 12 years old and has severe autism. Joshua Wills has autism so severe that he has harmed himself and needed to be institutionalized for his safety. However, there is no suitable facility close to Joshua's family, so he had to be sent to Birmingham 260 miles away from his family (a 5 1/2 hour trip). Phillip Wills is an Autism Light because he is advocating for the need for a treatment facility to be developed closer to Cornwall to help those with severe autism like his son Josh. Even though it would be constructed too late for Joshua to use, Phillip Wills hopes Josh's story and his advocacy will make a difference in the lives of other autism families in the United Kingdom who may face similar challenges in the future.

Phillip Wills said about his advocacy for an autism treatment facility near Cornwall, "It's too late for Josh, but if I can come close to stopping another father and mother having to make the decision to send their confused, upset hurting boy 250 miles away from their family then I feel I have done a good job for somebody else (Source)."

Phillip Wills offered this advice to parents of children with autism via Autism Light.


To other parents, don't give up, keep fighting, cherish the good bits, concentrate on them (My films "The Adventures of Joshua Wills" are about the positive side, watch them if you need reminding that it is not always bad). Look after yourselves and keep strong and healthy! Make time for yourselves as well, either as a couple or with friends or both! Whatever life throws at you, keep your child's smile in your mind. Take what it throws and then step forward stronger. REMAIN POSITIVE. ALWAYS.

Here is another video on Joshua Wills that Phillip Wills created called "The Further Adventures of Joshua Wills."

Social Media: You can follow Phillip Wills' advocacy for his son Josh and other children with autism at the following social media pages. Phillip Wills provides regular updates on Josh and his advocacy with the government about the need for a closer autism facility.

For more information on Phillip Wills' advocacy for autism see these news articles.
Joshua Wills is blessed to have four very special adults in his life. There is his father Phil and his StepMum Gill as well as his mother Sarah and StepDad Gavin who love him very much. Special thanks to Phillip Wills for being an Autism Light. We look forward to following the ongoing developments as Phillip Wills advocates through the government and community channels to get an autism treatment facility in the United Kingdom closer to Cornwall.

Photos: The photos in this post were used with permission of Phillip Wills.
Posted by Alan Stokes at 12:17 PM