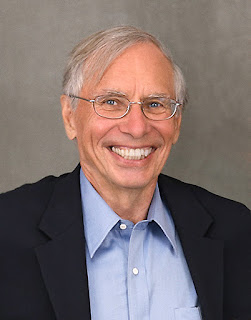 Dr. Ole Ivar Lovaas was born in Lier, Norway on May 8, 1927. He was a clinical psychologist at UCLA who spent 40 years in autism research and pioneered a treatment for autism known today as the Lovaas treatment. Lovaas is also regarded as the Father of Applied Behavioral Analysis as it applied to people with autism.  Dr. Lovaas passed away on August 2, 2010, in Lancaster, California. Dr. Ole Ivar Lovaas is being named an Autism Light posthumously and added to the Autism Light Memorial Roll because of his contribution to the field of autism treatment.

The New York Times obituary for Dr. Lovaas states that he was "a psychologist who developed one of the most widely used therapies for children with autism, and in doing so helped change the treatment and the public perception of the condition (Source)." The following is an early interview done with Dr. Ivar Lovaas. In addition to it's historical value it provides a background into the approach for treatment used by Dr. Lovaas.


Dr. Jacqui Wynn, a former student of Dr. Lovaas and the director of the Center for Autism Spectrum Disorders at Nationwide Children's Hospital in Columbus, Ohio, gave this tribute to Dr. Ivar Lovaas:


He gave hope and opportunities to children and families who really had no hope or opportunities before him. It was all based on Ivar believing what at the time was thought to be impossible--that these kids could learn and change and lead normal lives. He stuck with that belief doggedly (Source).

Early Life: Dr. Ivar Lovaas worked as a farmer in Norway as a young man during the Nazi occupation of his country.

Education: Dr. Ivar Lovaas earned his undergraduate degree from Luther College in Iowa where he earned a scholarship in music for his skill in playing the violin. He went on to earn his doctorate of psychology from the University of Washington.

Career: Dr. Ivar Lovaas became a Professor of Psychology at UCLA in 1961. At the time of his death he was an Emeritus Professor of Psychology at UCLA.  The Los Angeles Times said, "At UCLA, Lovaas' class, Psychology 170A: Behavior Modification, was among the most popular undergraduate courses. In a booming voice, he entertained students with stories of Norway and played the song "Dust in the Wind" to introduce a lesson on human malleability (Source)."

Research: Dr. Ivar Lovaas was influential in showing that some children with autism could benefit from treatment.  His paper called, Behavioral Treatment and Normal Educational and Intellectual Functioning in Young Autistic Children was important and spreading that message to the autism treatment community.

Quote: Dr. Ivar Lovaas' said regarding research, "If we lose or minimize the importance of peer-reviewed outcome data, we abandon the defining feature of behavioral approaches to social problems (Source)." 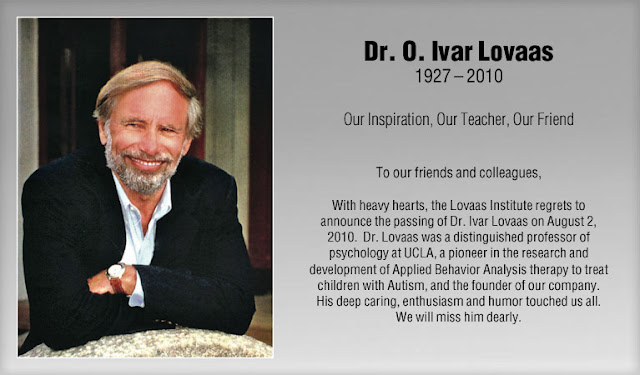 More information on Ivar Lovaas is available on these many sites who recognized his life accomplishments:
Special thanks to Dr. Ivar Lovaas for being an Autism Light. Your work was not in vain and its impact continues to this day to help brighten the lives of children and families with autism.

Photo: The photos of Dr. Lovaas in this post were used with permission of the Lovaas Institute.