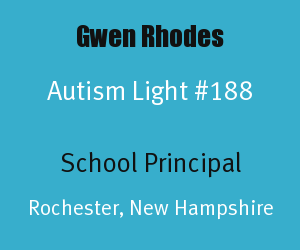 Gwen Rhodes was reluctant to be labeled a hero.  She said, "This is just something that was a circumstance and you did what you needed to do when the circumstance happened, but what we do every day is what makes people that work in schools heroes (Source)."

Gwen Rhodes may not want to be labled a hero but she is one to Andrew's father Chris Brown, who said, "She’s a hero to me and I’ve always said she’s like a second mom (Source)."

The following is a news story from the event done by WBZ-TV in Boston.

For more information on this heroic story view these online articles.
Special thanks to Gwen Rhodes for being an Autism Light for a student that had wandered into harms way. Thankfully we won't know what may have happened if Gwen Rhodes hadn't dived into the icy river after Andrew Brown. As the first school principal to be an Autism Light, Gwen Rhodes is representative of administrators who are diligent in their task of protecting children, especially those with autism and special needs.