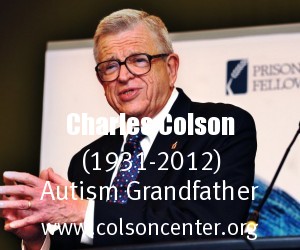 Charles "Chuck" Colson was born on October 16, 1931, in Boston, Massachusetts. He died on April 21, 2012, from complications of a brain hemorrhage. Some people have heard of him as a Special Counsel from 1969-1973 for U.S. President Richard Nixon. Others were introduced to Colson for his role the last 36 years as a leader and prolific author in evangelical Christianity and the founder of the organization Prison Fellowship. But not everyone may know that Charles Colson, the towering figure that he was, was brought to his knees in order to communicate with his now 20 year old grandson Max who has autism.

It was with vigor and enthusiasm that Charles Colson approached being a grandparent of a child with autism for the last years of his life. Colson has helped the autism community by talking publicly about how his faith was impacted by having a grandson with autism, especially as he witnessed the love of his daughter Emily raising Max as a single parent. Charles Colson is being named an Autism Light for the contributions he has made to autism awareness as a grandfather and as a leader in the faith-based community. Charles Colson was placed on the Autism Light Memorial Roll and this post updated, as he passed away the same day he was named an Autism Light.

Christianity: Charles Colson converted to Christianity in 1973. He served his prison sentence for his role in Watergate, and out of that experience he founded the organization Prison Fellowship in 1976. Prison Fellowship is the world's largest organization for prisoners in over 100 countries. Much of his writings are available for reading at the Colson Center website.

Awards: Charles Colson has received numerous awards. Two awards Colson received were the Others Award from The Salvation Army in 1990 and the Presidential Citizens Medal by President George W. Bush in 2008.

Author: Chuck Colson is a prolific author or co-author of over a dozen books about his life, faith and views of society from 1976 to 2011. His first book Born Again was published in 1976 and his most recent The Sky is Not Falling was published in 2011. The book Dancing with Max that he co-wrote with his daughter Emily is of a personal nature like Born Again. You can read more about Charles Colson's books and awards at his Wikipedia page.


With infinite patience and constant attention he has built a close and good relationship with his autistic grandson, Max. This private achievement has required more effort and more love than many of Colson's public achivements (Source).

Jonathan Aitken also concludes that, "Colson communicates well with all his grandchildren, even though he is in some ways closest to Max as both a father figure and a grandfather (Source)."

Dancing With Max: Charles Colson wrote the introduction and epilogue to his daughter Emily Colson's book called Dancing with Max that was published in August, 2010.  Emily Colson raised Max as a single parent, making Charles Colson a father figure as well as grandfather to Max. One of the highlights of Charles Colson's family and ministerial life includes being given the opportunity to baptize his Grandson Max, who made a profession of the Christian faith. The following is Colson's weekly segment called 2 Minute Warning from September, 2010 where he discusses the book Dancing with Max.

Although Charles Colson is a leader in the Christian world who has wrote dozens of books and spoke to millions of people around the world about his faith, he said that he continues to learn new things about God by witnessing the unselfish love demonstrated by his daughter Emily toward her child with autism. Here are two favorite quotes from Charles Colson directed toward parents of children with special needs.
Here are some additional online information on Charles Colson's discussion of autism.

Social Media: You can interact with Charles Colson, his family, and work on his Facebook page.

Funeral: For updates on services for Charles Colson's check the Official Updates from Prison Fellowship.

Special thanks to Charles Colson for caring about autism and being a wonderful grandfather to Max. Your efforts are an example to the multitude of grandparents of people with autism, especially those that share your Christian faith.

Photos: The photos in this post were used with permission of the administrator of the official Charles Colson Facebook page.
Posted by Alan Stokes at 10:42 AM