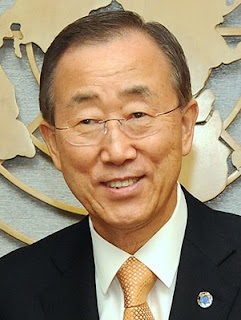 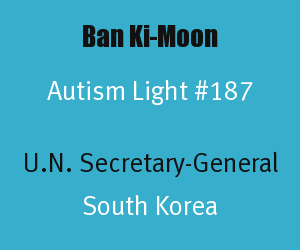 April 2 was adopted by the United Nations as World Autism Day in 2007.  On April 2, 2012, Ban Ki-Moon gave this year's message as Secretary-General. The complete message is at this link. In the message Ban Ki-Moon said,


The annual observance of World Autism Awareness Day is meant to spur such action and draw attention to the unacceptable discrimination, abuse and isolation experienced by people with autism and their loved ones.  As highlighted by the Convention on the Rights of Persons with Disabilities, people with autism are equal citizens who should enjoy all human rights and fundamental freedoms (Source).

The following is a video of a speech Ban Ki-Moon gave in 2010 for Autism Awareness month. In his speech he talks about working with Autism Speaks.


UN Autism Stamps: On April 2, 2012 the United Nations released six autism awareness postage stamps and two special envelopes designed by artists with autism. The artists were recognized in a April 2 ceremony led by Secretary-General Ban Ki-Moon (Source). A press release on the stamps shares the inspiring autism stories of all the artists who designed the stamps.

Special thanks to Ban Ki-Moon for leading the United Nations to take such a clear stand on the need to end discrimination against people with autism. These efforts are raising autism awareness in the international communities that follow the leadership of the United Nations. Ban Ki-Moon becomes the first Autism Light from South Korea.


Photo: The photo in this post is in Creative Commons of Wikipedia. It is attributed to Gobierno de Chile.
Posted by Alan Stokes at 7:00 AM