Danielle Jacobs (Autism Light #414) died on February 4, 2016 (CBS News, Woman Killed by Police Had Viral Autism-Awareness Video, February 5, 2016). This post will remain at Autism Light in her memory. She will be placed on the Autism Light Memorial Roll and remembered at the Autism Rest blog. 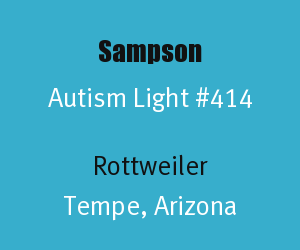 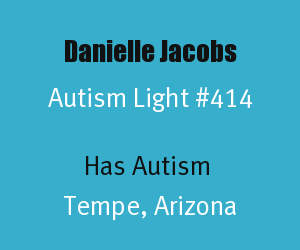 Danielle shared the video of Samson comforting her during a meltdown on YouTube and it received over 5 million views on YouTube and was one of the Top Ten Videos in all of YouTube for the week of June 2, 2015.

Danielle Jacobs wrote this description to the video that she uploaded to YouTube. "This is what having aspergers is like. Please no negative comments this really happened and it's not easy to open myself and share what it's like on a daily basis. This is what's considered a meltdown. Yes Samson is alerting. I trained him to alert to depressive episodes and self harm not both but he alerted. It appears the response is late but it's actually supposed to be as I'm coming out of the meltdown as I tend to have a panic attack after."

Danielle Jacobs told Buzzfeed News that after she got Sampson she "immediately began training him for service work for Asperger's syndrome, PTSD, TBI, and anxiety disorder. He alerts to meltdowns, anger, depressive episodes, flashbacks and nightmares, stimming, provides balance and counterbalance, and alerts to panic attacks (Buzzfeed News, June 16, 2015, Alan White, An Autistic Woman Has Bravely Shared a Video of Her Dog Comforting Her)."

Susan Dunne wrote an opinion piece for the Autism Daily Newscast about Sampson being a hero. She describes Sampson's critical role as an autism therapy dog as follows:


Sampson typifies what makes animals so special - he does not intervene with reasoning (pointless at this stage anyway), with pleading or restraint, nor does he ignore it and walk away. He persists, he stays with his owner, lets her know that he is not giving up on her even though she may at this point have given up on herself. He is there for her, bringing a safe warm presence into a broken place. He reaches across the despair and hurt but doesn't try to control it. He is in there with her for as long as it takes and he wins her round as she accepts his presence and reaches out to hug him (Autism Daily Newscast, June 17, 2015, Susan Dunne, Opinion: Self-harm Video Shows Heroism of a Dog).


You can read more about Danielle Jacobs and Samson at these online stories.

Social Media: Danielle Jacobs is increasing autism awareness through the videos on her personal experiences that she has uploaded to her YouTube Channel.

Special thanks to Danielle Jacobs for having the courage to share this video so that millions can learn about autism and the role a therapy dog can have. Danielle Jacobs is representative of the many people with autism that are trying to raises awareness of their condition. Sampson is likewise a fine dog to represent the many therapy animals who are unsung heroes.

Autism Light honors diverse heroes to the world of autism.
Posted by Alan Stokes at 3:50 PM