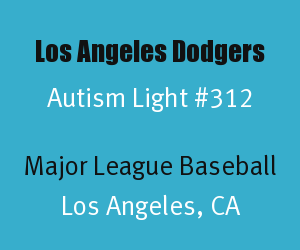 
Holly Robinson-Peete (Autism Light #100) sang the National Anthem for this occasion and George Lopez threw out the first pitch. The game also provided the opportunity for the public to recognize Patrick Brady and some successful members of the Exceptional Minds vocational program (Autism Student Knocks It Out of the Park at Dodger Stadium, PRWEB, August 16, 2013).

Here is a video of highlights from the those who were at the autism awareness game.

Here is a tweet from Autism Speaks-Los Angeles after the event.

Thank you all for attending our 2nd Annual Autism Awareness Night at Dodger Stadium! Dodgers pulled it out and... http://t.co/YdnU1p79bV
— Autism Speaks - LA (@autismspeaksla) August 16, 2013

Stephanie's Day: The Los Angeles Dodgers also supported and participated in the 2013 Stephanies Day Resource Fair which was held on June 8, 2013 and sponsored by CBS LA (Dodgers Community Relations, Pitching in the Community, June 13, 2013). Autism father Steve Mauldin founded Stephanie's Day over 15 years ago and the event provides an excellent opportunity for families impacted by autism in the Greater Los Angeles area to receive important information on autism resources (A Proud Father Tells What His Daughter and Stephanies' Day Means to Him, CBS Los Angeles, July 11, 2012).