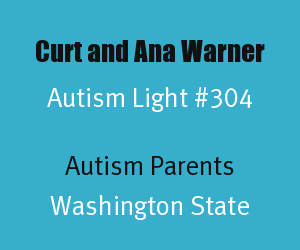 Curt and Ana Warner are from Clark County, Washington. They have four children. Their twin sons Austin and Christian have autism and are now 19 years old. Curt Warner is a former NFL Football Running Back. Curt and Ana Warner are Autism Lights for their autism advocacy as well as their dedication as autism parents.

Here is an ESPN News story on Curt and Ana Warner's family and how autism has impacted it.

Penn State Career: Curt Warner was the leading rusher on the Penn State Football Teams from 1980-1982.  His 3,398 career yards rushing was a Penn State Record that lasted until 2010.  He helped Penn State win their first National Championship in the 1983 Sugar Bowl. In 2009, Curt Warner was inducted into the College Football Hall of Fame.

NFL Career: Curt Warner was a Running Back from 1983-1989 for the Seattle Seahawks of the National Football League. He made the Pro Bowl 3 times. He concluded his career in 1990 with the Los Angeles Rams. You can view Curt Warner's complete NFL statistics at the Pro Football Reference Website.

National Autism Conference: Curt and Ana Warner delivered the keynote speech at the National Autism Conference on August 1, 2013 that was held at Penn State University (Read More in an Article on the Warner's by the Centre Daily Times). It was their first public speech on autism except for the ESPN film that was done on them.  You can view the entire speech on this YouTube video.


Here are two autism quotes from the Warner's speech at the National Autism Conference.

Special thanks to Curt and Ana Warner for being Autism Lights. Their dedication as parents and as advocates is a bright spot for all those in the autism community. To read other posts about Athletes visit the Autism Light Sports Page.