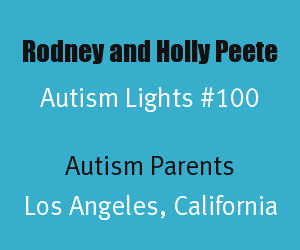 Rodney and Holly Robinson Peete are from Los Angeles, California. Rodney Peete was born on March 16, 1966 and Holly Robinson Peete was born on September 18, 1964. They married in 1995 and are parents of four children, Ryan Elizabeth Peete and son Rodney Peete, Jr (twins born in 1997), son Robinson James Peete (born in 2002), and son Roman Peete (born in 2005). Their son Rodney (R.J.) has autism. Rodney and Holly are Autism Lights because of their autism advocacy through being authors, speakers, philanthropists and operators of a foundation for autism called the HollyRod Foundation.

Rodney Peete's Career: Rodney Peete was a star football player for the University of Southern California leading them to the 1988 and 1989 Rose Bowls. He won the Johnny Unitas Award in 1989. Although he was drafted also as a 3rd Baseman by Major League Baseball teams, Rodney Peete chose to play football and he went on to play 16 years in the National Football League from 1989-2005. His career stats are at the Pro Football Reference Website. Rodney Peete played on the Carolina Panthers 2003 team that played in Super Bowl  XXXVIII. Rodney Peete is now a broadcaster.

Holly Robinson Peete's Career: Holly graduated from Sarah Lawrence College. She has had roles as an actress in the following shows.

For Peete's Sake: It was announced in May, 2015, that Holly Robinson Peete and Rodney Peete and will soon have their own show on Oprah Winfrey's OWN Network. It has a working title called For Peete's Sake. It will be a documentary on their family life of juggling dual careers with raising four children (RealityTea, May 8, 2015).

Holly Robinson Peete wrote a song called Come Into My World that she sings with her son Rodney in the following video.


Authors:  Both of the Peete's are authors in their own right. Holly Robinson Peete wrote My Brother Charlie with her daughter Ryan, which helps neurotypical children understand about autistic kids. Rodney Peete wrote Not My Boy!  to share his story with his son who has autism. The following video is Rodney and Holly Robinson Peete discussing their life with a child with autism and the books they wrote.

Holly Robinson on Autism: Holly Robinson Peete said this about her son that provides a good look at her passion and perspective on autism. "My son w/autism has an AMAZING brain [and] can tell you any fact about NBA, MLB even NHL! We need to embrace these children in society-god's gifts. We need to change ourselves as a society to accept children w/autism and special needs for who they are (Black Celebrity Kids.com, August 4, 2009)."

Holly Robinson also says this on her foundation's website, "I wouldn't change my son for the world but I would change the world for my son."

Social Media:  You can follow Rodney, Holly, and the HollyRod Foundation at the following social media areas.

Wikipedia: You can also find out more about Rodney and Holy at their Wikipedia pages.

Special thanks to Rodney and Holly Robinson Peete for being dedicated autism parents and amazing autism advocates. You are amazing heroes for the cause of all the autism community. The autism family is blessed to have your dedication and hard work lighting the way for improving situations for those with autism.

Autism Light honors diverse heroes to the world of autism.
Posted by Alan Stokes at 9:00 AM