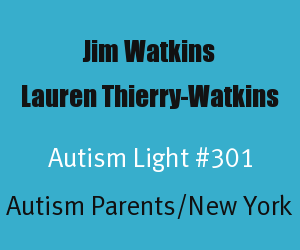 Jim Watkins is a news anchor for RNN's FiOS1, which is seen in Long Island and parts of New Jersey. Lauren Thierry Watkins worked for 5 years reporting financial news for CNN before she quit to care full-time for her autistic son. Jim and Lauren have a 15 year old son with severe autism named Liam. Jim and Lauren Thierry Watkins are Autism Lights for their dedication as parents and for their inspirational efforts in raising public autism awareness and acceptance over the past decade through media and fundraising.

Jim Watkins was interviewed for a news story called "Living With Autism: A Father's Story" that was done prior to Autism Awareness Month in 2013. Jim Watkins raises some issues to the public in the feature that many autism families face. One sad reality he acknowledges in the news story is that, "When my son was first diagnosed with autism in 1999, no one could tell me what in the world caused this, and now in the year 2013 no one can tell me what in the world made him autistic. And that is hard to deal with (Living with Autism: A Father's Story, 2013)."

Part 2 of the above news story is available at this YouTube video.


Jim Watkins: Jim Watkins graduated from the University of Tennessee-Knoxville. Prior to joining FiOS1 as a news anchor, Jim Watkins served as the TV News Anchor at WPIX-TV from 1998-2010. His experience as a news anchor also included time with WNBC-TV in New York, and WTVF-TV in Nashville, Tennessee. You can read more about Jim Watkins at his Jim Watkins' Wikipedia Page.

Lauren Thierry: Lauren Thierry provided the Financial News for CNN for five years. She quit this position in the public arena to care full-time for her son Liam. Jim Watkins said this about his wife:

I have to say about my wife. And I think that it's true in so many families. She does all the work! She told me all these things she was doing today on the phone and I go, 'You're doing all these things at home and who gets to go on TV tonight and talk about how we are dealing with autism' (Hear More at this Interview of Jim Watkins on YouTube).

Autism Every Day (2006):  Jim Watkins, Lauren Thierry, and Eric Solomon produced the 2006 film called Autism Every Day and Autism Speaks sponsored it (Read More at this January 21, 2007 Article by the New York Times). Lauren Thierry served as the Director of Autism Every Day. The film chronicled the lives of 8 families living with autism. Each family had a camera crew film their home life for 24 hours to provide footage for the documentary. Ron Rosenbaum has written a review of the film for the New York Observer called TV Anchor Mom Fights Autism and Films It. You can read more about the film at the Autism Every Day Wikipedia Page.

Autism Every Day: 7 Years Later: Jim Watkins did a series for Autism Awareness Month in 2013 called Autism Every Day: 7 Years Later. The film looks at how some of the families featured in the 2006 film are doing in 2013. There is also information on some developments and opportunities for people with autism in 2013 as part of the content. The following is the first part of the series. Other parts of the series are available on the RNN TV/Richard French's YouTube Channel.

"We're in this for the long haul. You can't imagine what every small breakthrough means to a parent. And almost the only way that will ever happen is with a sensitive education like NYCLI provides (Read More at this Article by the New York Social Diary)."

Other Events: Jim Watkins has served as emcee for several other autism fundraising events, including the Autism Speaks event in New York City called A Weekend for Walking.
Special thanks for Jim and Lauren Thierry Watkins for being Autism Lights. Their light shines both through their dedication as parents to their son Liam and for their public leadership in promoting autism acceptance and fundraising on behalf of the autism community.

Autism Light honors diverse heroes to the world of autism.
Posted by Alan Stokes at 12:29 PM