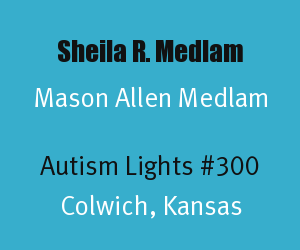 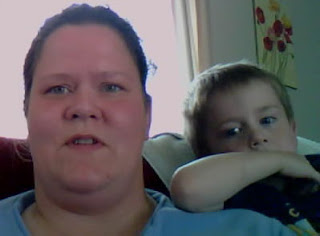 Sheila R. Medlam is from Colwich, Kansas. She is the mother of Mason Allen Medlam, who passed away at the age of 5 on July 29, 2010, after he wandered away from his home and drowned in a nearby pond. Sheila Medlam is an Autism Light, because since the tragedy of losing her son, she has been an influential national advocate for autism safety and wandering awareness, including talking to numerous commuity law enforcement agencies, promoting the Mason Alert system and founding the Mason Allen Medlam Foundation for Autism Safety. Because of the inspiration that the memory of Mason Allen Medlam has on his mother and her work in wandering awareness, we are also naming Mason an Autism Light posthumously. His name will be placed on the Autism Light Memorial Roll today.

Mason Allen Medlam: Mason Allen Medlam left this world on July 29, 2010, after he wandered away from his home and drowned in a neighbor's pond. However, in a real sense Mason continues to shine his light each time the life-saving autism safety and wandering awareness initiatives are adopted by the autism community through the leadership of his mother. Sheila Medlam writes about the blessing of Mason's brief childhood on the front page of the Mason Allen Medlam Foundation's website. 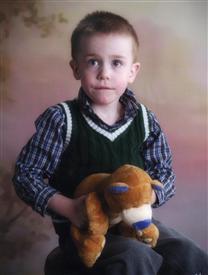 My son, Mason, was born on July 07, 2005. He was brilliant, beautiful and full of joy. He lit up our world and was the center of our universe. Sometimes he would break out into this glorious laughter, and even though you couldn't figure out what he was laughing at, you would join in because the sound of it touched your soul and filled it with joy. He was the most incredible child I have ever known. He loved life and life seemed to love him. He overcame more obstacles in his life than many adults ever have to even contemplate and he did it with a smile on his face and laughter in his heart (Read More at the Mason Allen Medlam Foundation Website).

Sheila R. Medlam: Sheila Medlam worked as an estimator at the time of Mason's death, but she is now studying to become a structured learning educator, so she can help teach children with severe autism like Mason. Sheila Medlam describes herself and goals this way on her blog.


I am about to drive over the edge of forty. I live on a farm in Kansas with my husband, daughters and many animals. I have an angel in heaven who wandered from home and drowned in a neighbor's pond when he was five years old. His name is Mason Allen Medlam and he was severely autistic. He is my purpose, my drive, my heart. Everything I do for the rest of my life is because of him. I love you, Bubby, I love you, I love you, I love you (Read More at Sheila R. Medlam's Blog).

Here is a video from Sheila Medlam and the Mason Allen Medlam Foundation that provides information on the goals of the foundation and serves to give educational awareness of some procedures and equipment that could prevent future tragedies. The YouTube video says, "The Mason Allen Medlam Foundation's goal is to layer all the protections we can around each at risk person." The video also respectfully remembers some of the precious lives with autism that were lost to wandering around the time it was made and helps show the depth of the problem.


United States Health and Human Services: On October 22, 2010, Sheila Medlam was a speaker at the Interagency Autism Coordinating Committee (IACC) about autism wandering awareness. She corresponded with Kathleen Sebelius, the United States Secretary of Health and Human Services, about her message to the IACC. The exchange of letters is available as a note on Sheila Medlam's Facebook Page.

Blogger: Sheila Medlam has a WordPress Blog, where she shares about her life and promotes autism safety. She also documents the tragic accounts of new incidents of autism lives lost to wandering or elopment. The blog shares Sheila's dreams and goals and is a treasure of educational material on wandering awareness and prevention as well as a memorial to those autistic lives lost to wandering. Sheila Medlam's Blog will be added today to the index on the Autism Light Blogs Page.

Social Media: You can interact with Sheila Medlam and the Mason Allen Medlam Foundation at the following social media areas:
One of the most serious problems facing the autism community today is the regular occurrences of those with autism wandering away from caregivers and falling a victim to tragedy, usually through drowning. Since Mason Allen Medlam passed away three years ago at least 65 known deaths from wandering have befallen the autism community. Below is a photo of some of those precious lives. 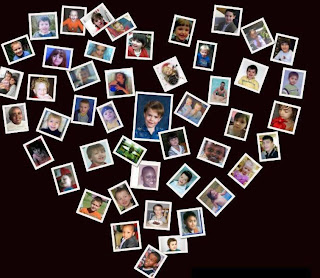 Today as Autism Light reaches the milestone of publishing the 300th point of autism light, it's hard to express in words the gratitude we have for Sheila Medlam, who has made autism safety and wandering awareness her life's passion since her son died from wandering. And we shall never forget Mason himself, whose brief life continues to help raise awareness of autism wandering, and whose light shines on as he inspires his mother and the autism community. Thank you Sheila and Mason!

The photos in this post are used with permission of Sheila R. Medlam.
Posted by Alan Stokes at 9:59 AM