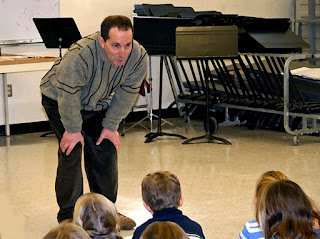 We all have a story to tell. People with autism have amazing stories inside them, but they sometimes need some extra help to be able to share them with the world. Today's Autism Light is a world famous storyteller who is hosting a fundraiser to help a family struggling with autism to write a new and wonderful story for their daughter.

Jim Weiss is from Charlottesville, Virginia. He has over 25 years experience as a children's storyteller and has received international acclaim. Tomorrow on Saturday, February 4, 2012, he will be in Dedham, Maine to host a fundraiser to help with the cost of autism therapy for a girl named Emma Stanley. Jim Weiss is an Autism Light for the way he is helping Emma's family raise funds to be able to write a beautiful next chapter in Emma's story.

Fundraiser for Emma Stanley:  Jim Weiss is hosting a fundraiser to help defray some of the high costs of autism therapy for Emma Stanley on Saturday, February 4, 2012 from 1:00-4:00 p.m. at The Lucerne Inn in Dedham, Maine. A website at http://storiesforemma.weebly.com/. has been created that explains all the details about the fundraiser. There is also a website called "Emma's Dreams" in which you can follow Emma's story and journey with autism. One of the therapies they are seeking to raise funds for on Emma's behalf is the Son-Rise Program from the Autism Treatment Center of America.

Emma's mother, Ellen Stanley told Autism Light that Jim Weiss is a legend in their home and they listen to him all the time. Ellen conveyed her utmost gratitude to Jim Weiss for helping her family in this way. She said,


For a complete stranger, a world renowned Storyteller to offer to do a fundraiser for us, well, it gives us hope. We feel like someone cares. It gives us the strength to keep on trying.

According to his website, "Jim travels extensively throughout The United States, giving live performances at stores, libraries, schools and community events. He has hosted and starred in a PBS television pilot that won a Northern California Emmy for "Best Children's Show," and has even performed at The White House Annual Easter Event."

However, if you are not able to hear Jim Weiss in person you can order one of his many recordings at this website. Here is a video of Jim Weiss being interviewed about the art of storytelling as part of a Home School Spotlight.


Social Media: You can follow the stories of Jim Weiss on his Facebook page.
Wikipedia: Jim Weiss also has a Wikipedia page.

The Autism Light blog is a growing collection of stories that each take diverse paths to meet in some way at the intersection of autism and hope. Special thanks to Jim Weiss for showing us the value of our story in life. Jim Weiss is truly an Autism Light for the help he is providing the Stanley family and little Emma as they journey with autism.