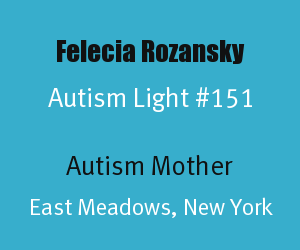 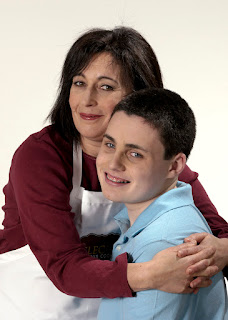 Felecia Rozansky is from East Meadow, New York. Her teenage son Eric has autism.  She became a special education teacher because of an obsession with autism born out of a love for her son. When Eric was older, she decided to go after her dream of starting a business known as Felecia's Fabulous Cookies. Felecia Rozansky is an Autism Light for all she has done as a mom, special education teacher, and how she used her business to continue to raise awareness for autism.

Teacher: Felecia Rozansky received her Master's Degree from Hofstra University. She spent 5 years teaching in New York and her skill had been acknowledged by the granting of tenure. 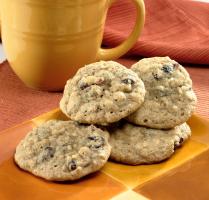 Felecia's Fabulous Cookies (2011-2012): Felecia Rozansky put her dreams to operate a cookie store on hold when she discovered her son had autism (later diagnosed as Aspergers), but she realized her life dream when she opened her cookie store on September 15, 2011. She used the business to raise awareness for autism, and it was a place people could talk about autism. Some people visited Felecia's store because they heard of her connection to autism through either her son or her donations and wanted to support the efforts, but others came for the delicious cookies and share that their life is also touched by autism. A portion of the proceeds from cookie sales were donated to the Autism Society of America.

Selling Store: On July 25, 2012, Felicia Rozansky shared with the Patch that she had sold her cookie store. Felicia Rozansky said, "My reason for selling the shop is entirely due to family obligations. In order to really start a new business it has to be your number one priority (For more information read the Patch Article).

Felecia Rozansky wrote to Autism Light that she is most passionate about educating the world about autism. This is is what she has learned after meeting so many people associated with autism.

Photo: The photos in this post is used with permission of Felecia Rozansky.

This post went into syndication on Autisable.
Posted by Alan Stokes at 9:00 PM