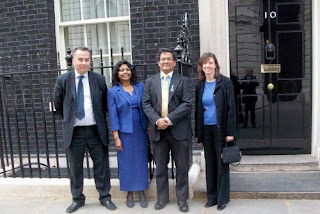 Ivan and Charika Corea are from London, England in the United Kingdom. Their teenage son Charin has autism and inspired them to become autism advocates. They are responsible for launching Autism Awareness Year in the UK in 2002 and founding Autism Sunday, which has grown into an international observance of autism awareness in the religious faith community. Ivan and Charika Corea are Autism Lights for their influential advocacy for autism. Their groundbreaking autism awareness work has not always been easy, but with hearts of true heroes they are compelled to fight for those that have no voice.

Ivan Corea wrote this about Autism Sunday: 'We want to thank God for the life of our son Charin. He is a wonderful son and has been such a blessing. Charin made me get out of my comfort zone and campaign on autism. He is the inspiration behind Autism Sunday. We have done all of this - not for money - but for love. Autism Sunday has become a global event because it comes from the heart - it's all about love.'

Autism Sunday:  2012 will be the 10th anniversary of Autism Sunday. It also known as the International Day of Prayer for Autism & Asperger's Syndrome.  This year it will be observed on Sunday, February 12, 2012. Cathedrals, churches, and religious organizations are being encouraged to remember in their worship the over 67 million people worldwide who are living with autism. In concert with Autism Sunday there will be a Autism Sunday 2012 Twitter Storm. People are encouraged to use the hashtag #autismsunday when they tweet on Twitter during February 12, 2012.

Here is a video featuring a poem by Janice Cox and a song by Kirk Franklin from the worship service in London for Autism Sunday in 2010. Families are being encouraged to upload their personal autism videos like this one on YouTube to mark Autism Sunday 2012.


Supporters of Autism Sunday:  Hundreds of organizations and dozens of dignitaries in the United Kingdom are backing Autism Sunday. According to the press release on the event sent to Autism Light, "Among those who have wished Autism Sunday well are HRH Prince William and HRH Prince Harry, His Holiness the Pope, Sir Cliff Richard, Pastor Rick Warren, Deputy British Prime Minister Nick Clegg, Leader of the Opposition Ed Miliband, the Bishop of London Rt.Rev Richard Chartres and the Archbishop of York, Rt. Rev. Dr. John Sentamu." British Prime Minister David Cameron also is supportive of the initiative.

The following is Ivan Corea speaking about the UK Autism Foundation's mission of encouraging help for the poor who have children with autism.


Special thanks to Ivan and Charika Corea for being Autism Lights. The autism community is very blessed to have their leadership in a project that calls us to pray and ask God to help give mercy in dealing with autism. Autism Sunday is needed now more than ever as autism is impacting millions of more people now than could have ever been imagined on that first Autism Sunday ten years ago.

Photo: The photos in this post are used with the permission of Ivan Corea.
Posted by Alan Stokes at 5:52 AM