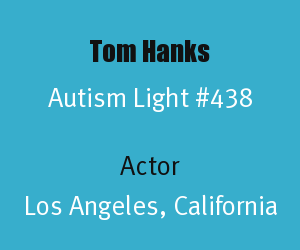 Tom Hanks is an American actor and filmmaker. He was born on July 9, 1956, and lives in Los Angeles, California. Tom Hanks has starred in dozens of films since starting his career in 1978, and he won an Academy Award for Best Actor in Philadelphia (1993) and Forrest Gump (1994). Tom Hanks is an Autism Light for the kindness he showed to a special fan with autism named Sarah Moretti in 2013.

Family: Tom Hanks has been married to Rita Wilson since 1988. He has four children, including Colin Hanks, who is also an actor.

Awards:  A list of the awards and nominations that Tom Hanks has received during his illustrious career can be found on Wikipedia.

The following is a video of some moments in Tom Hanks' career.


Fan with Autism: In 2013 Tom Hanks took time out of his schedule to visit backstage with Sarah Moretti, who has autism, after his performance of Lucky Guy at the Broadhurst Theatre in New York.

As Tom Hanks was looking through the fan scrapbook that Sarah had created on his career he remarked, "Sarah, this is so great. You know, even my mum doesn't have something like this (Mirror, Simon O'Kane, June 25, 2015, Video of Tom Hanks taking time out to greet his autistic super fan goes viral)."

The following is a video of the moment backstage when Sarah Moretti met Tom Hanks. Although this was taken in 2013, it wasn't released to the public until 2015.


Social Media: You can follow Tom Hanks on the following social media areas.
Websites: You can learn more about Tom Hanks at the following websites.
Special thanks to the actor Tom Hanks for being an Autism Light. The time he took out of his schedule to meet a very dedicated fan with autism named Sarah Moretti is reflective of the hope that famous entertainer's can bring into the lives of people with autism. We wish Tom Hanks all the best in his career and life.

Special Acknowledgement for the idea for Tom Hanks to be an Autism Light is given to Kerry Magro, Autism Light #119, who wrote a post about Tom Hanks on his blog.

Photo: The photo in this post of Tom Hanks is on the Creative Commons at Wikipedia.
Posted by Alan Stokes at 8:31 AM